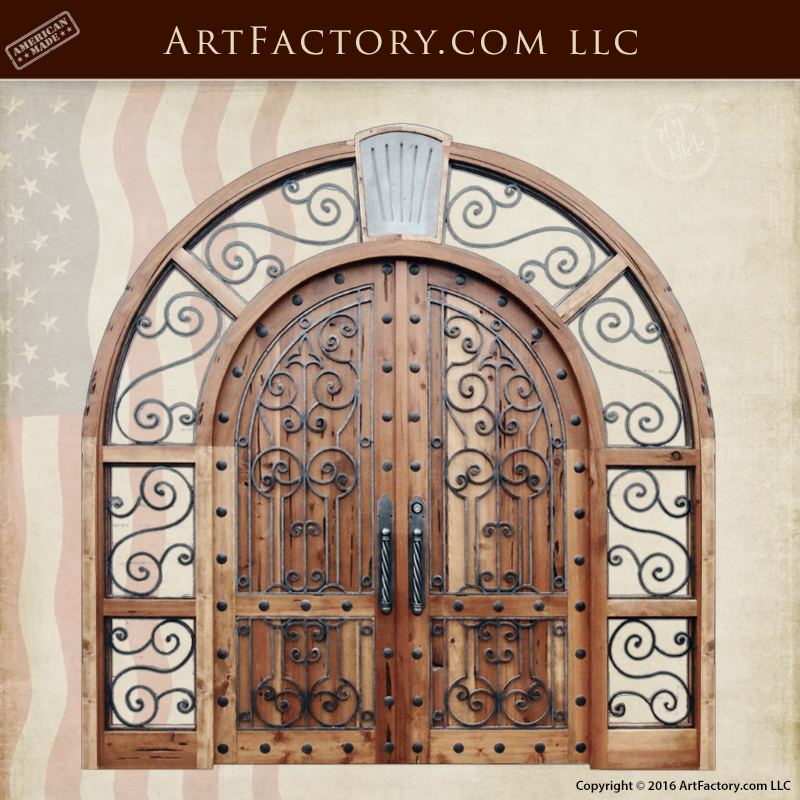 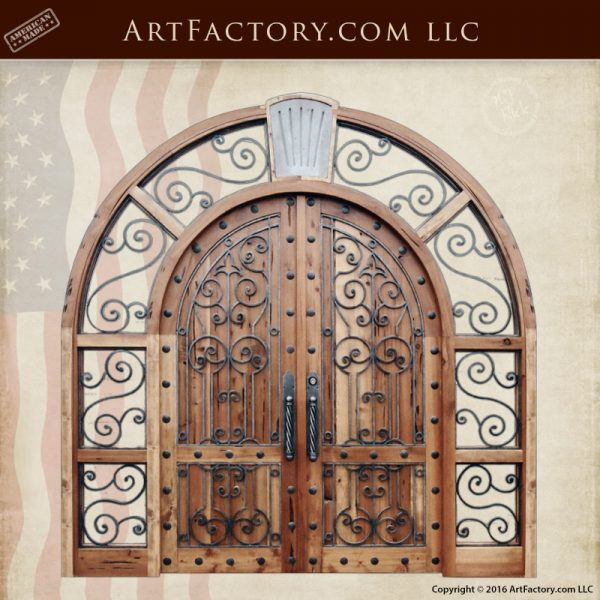 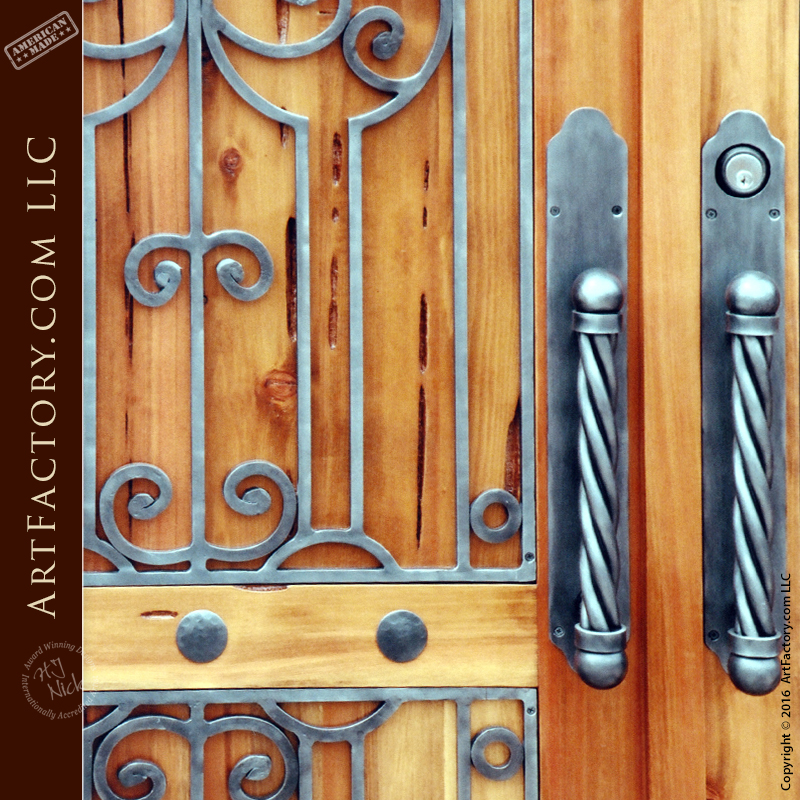 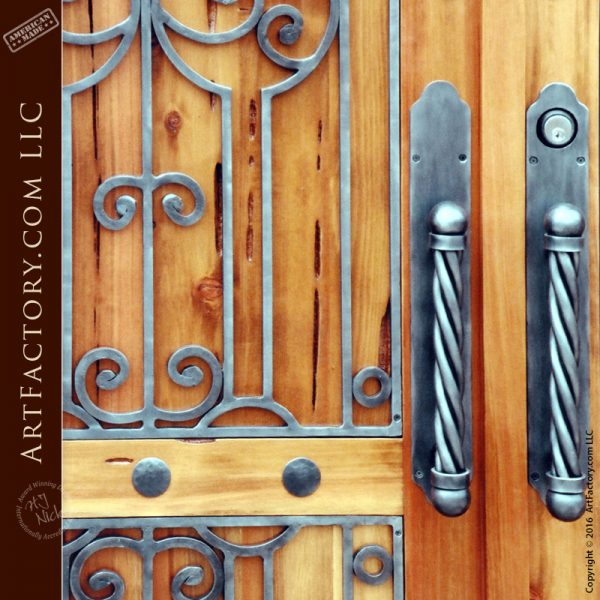 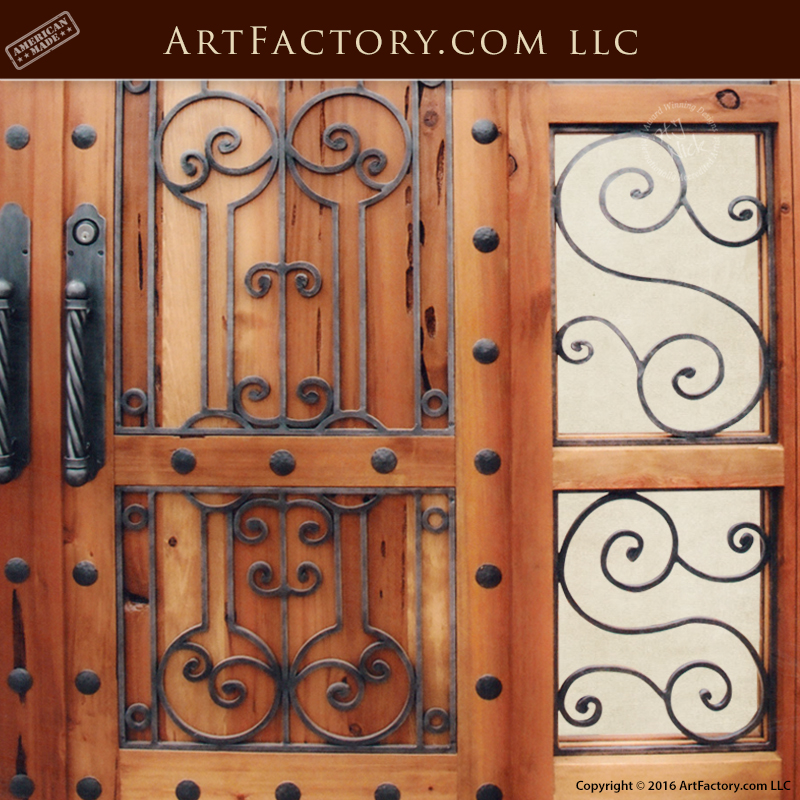 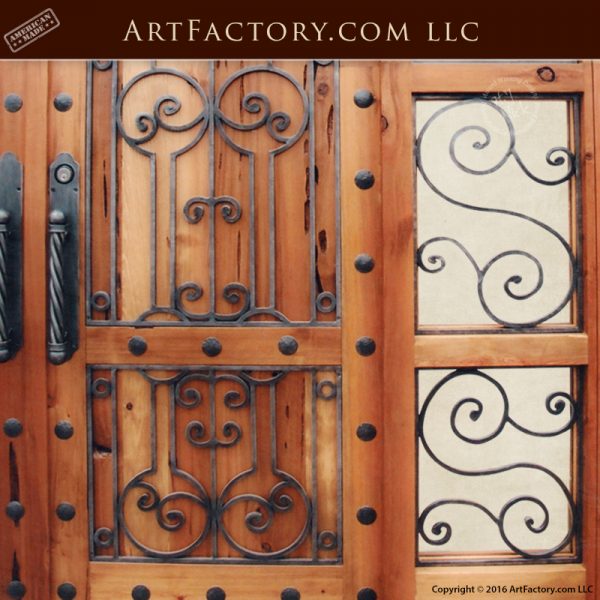 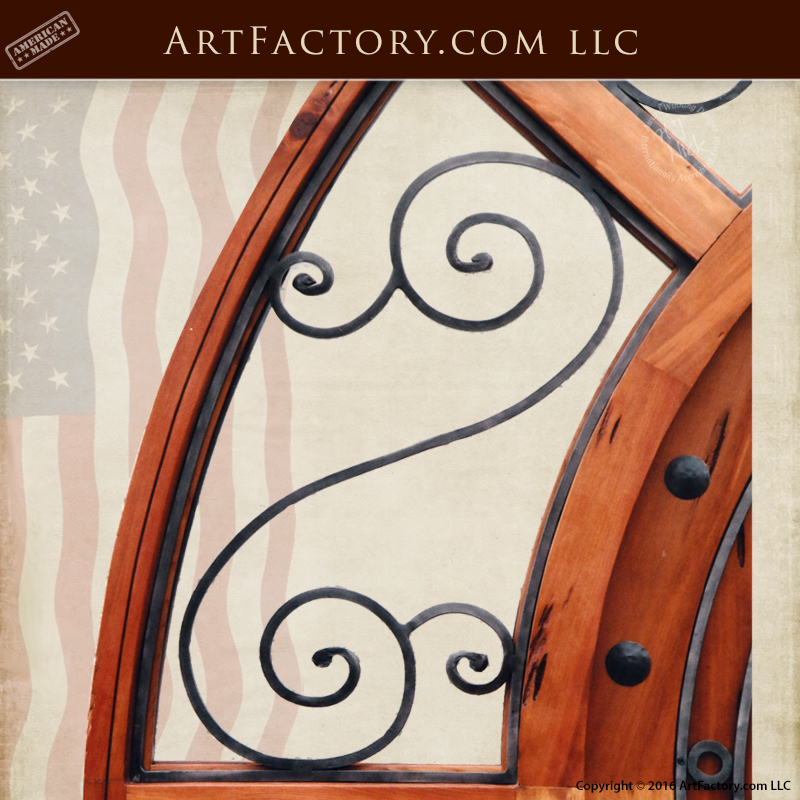 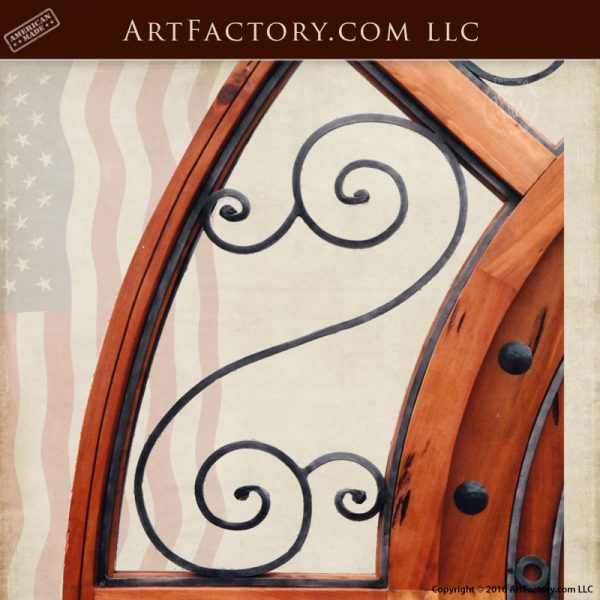 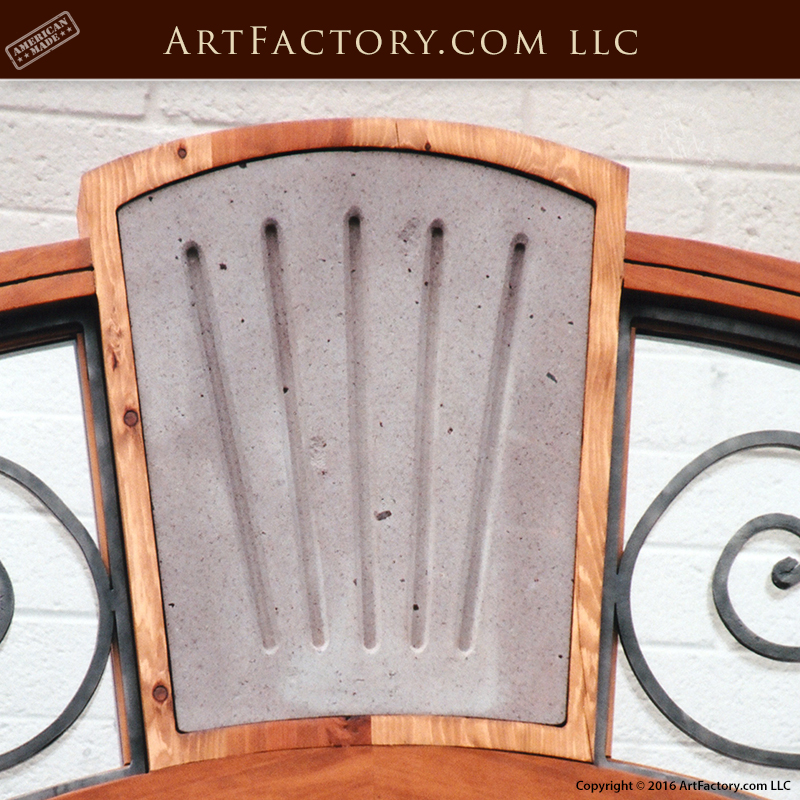 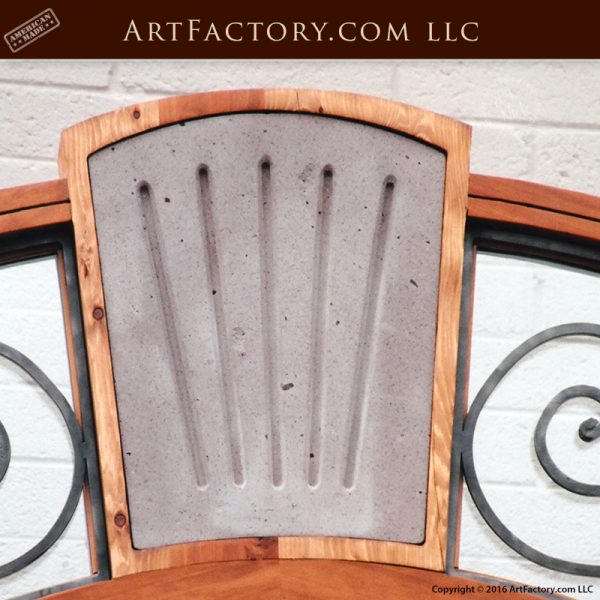 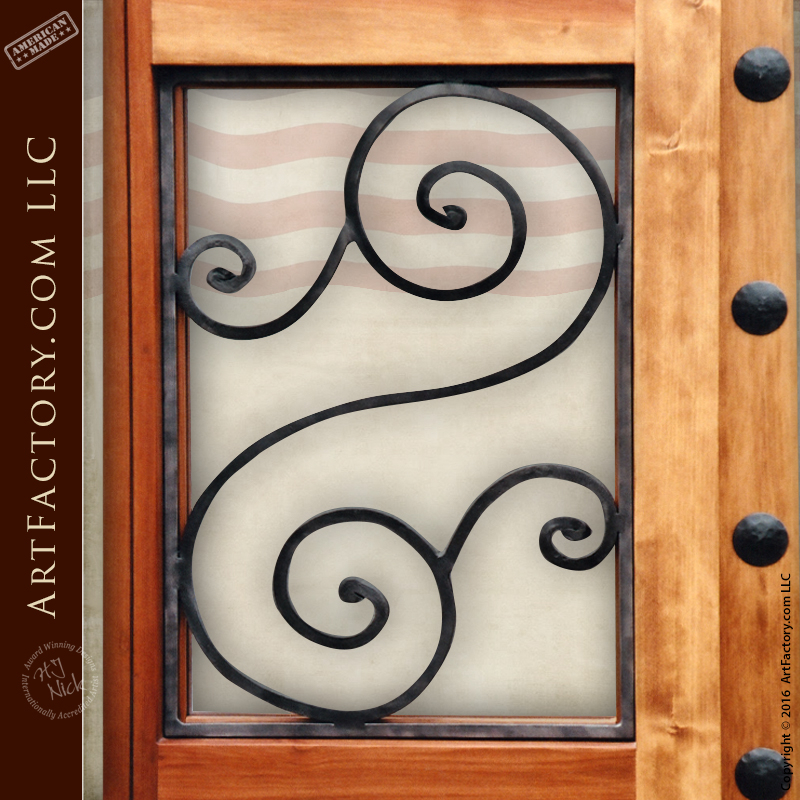 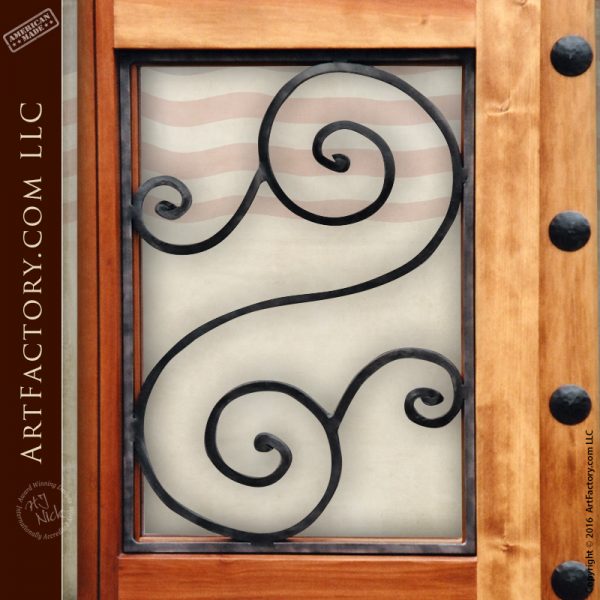 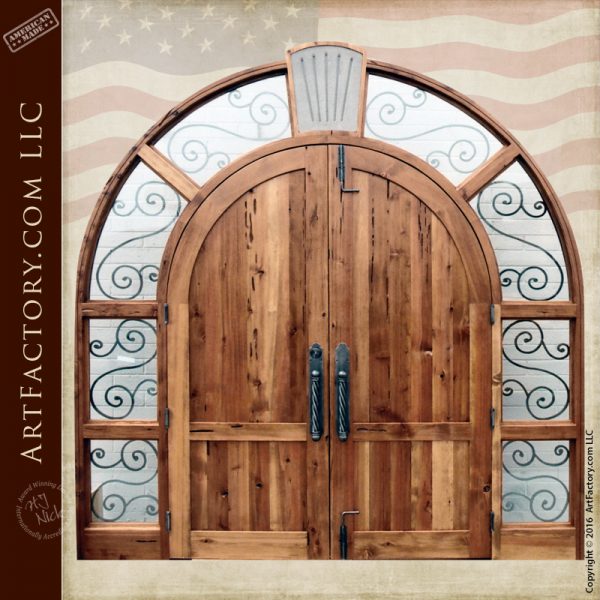 Made In The USA From All Natural Materials, Built To Stand The Test Of Time Since 1913 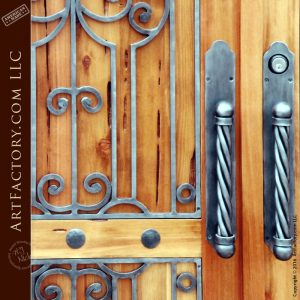 Though the doors in Broughton Castle are fairly simple, our inspiration for these arched grand entrance doors came from the intricate plaster ceilings and paneling of the interior of the castle. Transforming something simple into something exquisite is one of the trademarks of renowned artist and designer H.J. Nick. These custom made doors are a basic design, full arch double door, with a full surround with a keystone. Starting with the beautiful wrought iron and clavos work on the door panels and through each of the surround panels elevate these doors to the next level.

The wrought iron is hand forged by our master blacksmiths, anvil hammered and patina finished to each customers specifications. The full surround is 1" thick thermal glass, and is reinforced with decorative, fine art, ironwork. The keystone can be solid, as shown, or can be hand carved wood, or glass and iron, the choice is up to you. Decorative clavos are used to outline the doors and to separate the panels on each of the doors. The overall grandeur of the arched grand entrance doors is completed with a pair of hand forged ball and twist door pulls. The term "Grand Entrance" doesn't even begin to describe the impression these beautiful custom made double doors will have on your guests. Great Hall, Broughton Castle Inside the Great Hall of SP4138 : Broughton Castle, home of the Lord Saye and Sale. As well as having considerable historical interest, particularly related to the English Civil War, the Hall has featured in many film and TV programmes. - David Stowell [CC BY-SA 2.0 (https://creativecommons.org/licenses/by-sa/2.0)], via Wikimedia Commons

Broughton Castle is a medieval manor house located in the village of Broughton which is about two miles south-west of Banbury, Oxfordshire, England. It was built as a manor house by Sir John de Broughton in 1300 at a location where the confluence of three streams created a natural site for a moated manor. The house was sold in 1377 to William of Wykeham, Bishop of Winchester.

The original house was crenellated by Sir Thomas Wykeham in 1406. In 1451 it passed by inheritance to the Fiennes family (Barons Saye and Sele). Beginning in 1550 Richard Fiennes transformed the medieval manor into a house in the Tudor style. In the 17th century William Fiennes, 1st Viscount Saye and Sele was one of the leading activists against Charles I. He raised troops to fight against the king at the inconclusive Battle of Edgehill in 1642. Royalist troops later besieged the castle, overcoming the defenders and occupying the castle for a time. 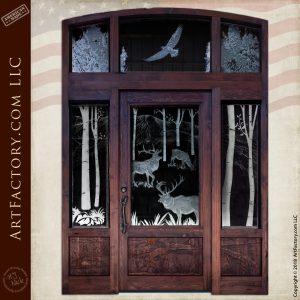 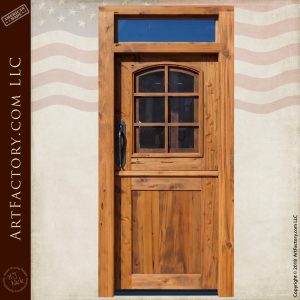 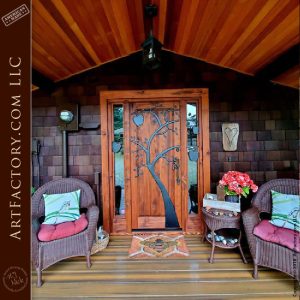 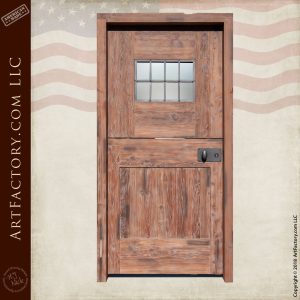 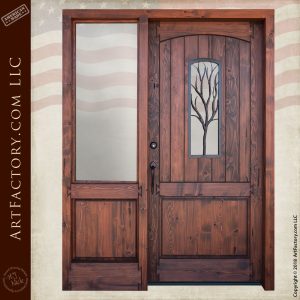 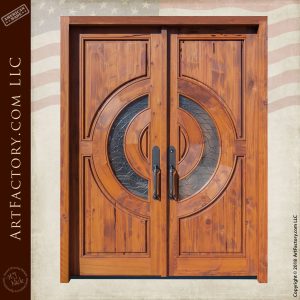