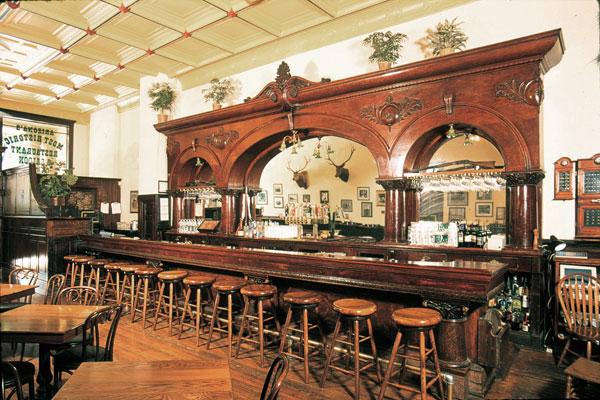 In 1877, D.C. Thorne built the saloon and named it The Palace Saloon; it was one of over forty bars which stood next to one another on Whiskey Row in Prescott. Over the course of its history it has seen such famous patrons as Wyatt Earp, Virgil Earp, Doc Holliday (in the 1870s before they headed south to Tombstone), and Steve McQueen. During his time in Prescott before leaving for Tombstone, Wyatt Earp was involved in several gunfights behind the saloon, killing two men. Holliday also killed a man in the saloon during a knife fight.

The World Famous Palace Bar first opened its doors in September 1877. Although Whiskey Row was known for its many saloons. The Palace was much more than a fancy “watering hole”. Men came in to check for notices of work available; it served as an election central for several area political races and cattle spreads; and mineral claims were bought and sold over the bar.
The Palace is still the oldest frontier saloon in Arizona and the most well-known and historic restaurant and saloon in the state.In the late 1870’s, Wyatt Earp, Virgil Earp and Doc Holliday were patrons of The Palace. Virgil and his wife Allie lived in Prescott where Virgil owned a saw mill at Thumb Butte and was Town Constable.

Wyatt and his other brother, Morgan, visited Virgil in Prescott before they left for Tombstone. Doc was on a winning streak on Whiskey Row (possibly at The Palace) where he won $10,000 in Poker. He joined the Earp’s eight months later in Tombstone. On July 14th, 1900, The Palace was destroyed by the Whiskey Row fire. The ornately carved 1880’s Brunswick Bar, which is still in use, was carried to safety across the street to the plaza by patrons.

In order to rebuild, the owner Bob Brow formed a partnership with Ben M. Belcher and Barney Smith, owners of the former Cabinet Saloon, also destroyed in the fire.
By 1901, The Palace Hotel and Bar, complete with Chinese restaurant and barber shop, was back in business. Today’s Palace owners have done extensive remodeling to restore the Palace to its grandeur of 1901. Although still an old western saloon bar, the addition of dining makes The Palace the gathering place it once was.

Let Us Build Your Western Style Bar Using Historic Bar Designs For Inspiration. We build custom bars for both commercial and residential. Choose any bar design from the historic record, and we will build it for your to historically correct specifications. Our hand carved bars are built with solid, natural air dried cedar cypress. Like all of our products, custom bars are hand hewn using mortise and tenon joinery.

This means built to last. At ArtFactory.com we are explicitly opposed to short cuts and fast processes building. We believe that quality craftsmanship takes time, and that is why we build using old world techniques. For a product that will stand the test of time, call 1-800-292-0008 for a custom quote today! Fine art bars built to stand that test of time, and to top it all off, we guarantee everything forever.

Hand Carved Wood Bar Built The Old Fashioned Way "When Everything Made In America Was Built To Last Forever" And Craftsmen Were Proud To Sign Their Work. 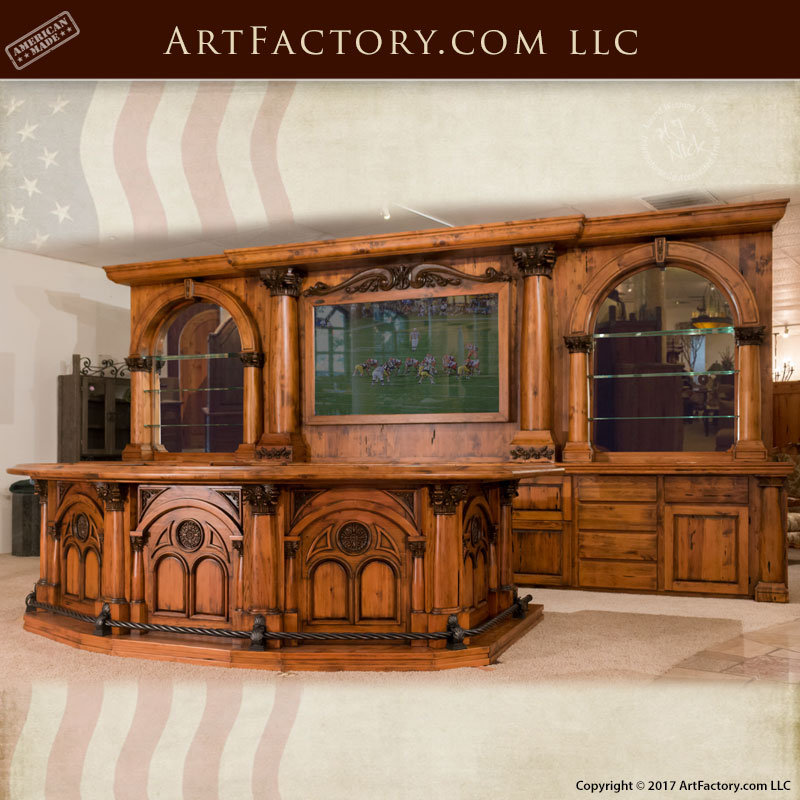 Old West Saloon Bar Is An H.J. Nick Original Design That Was Inspired By The World Famous Palace Bar