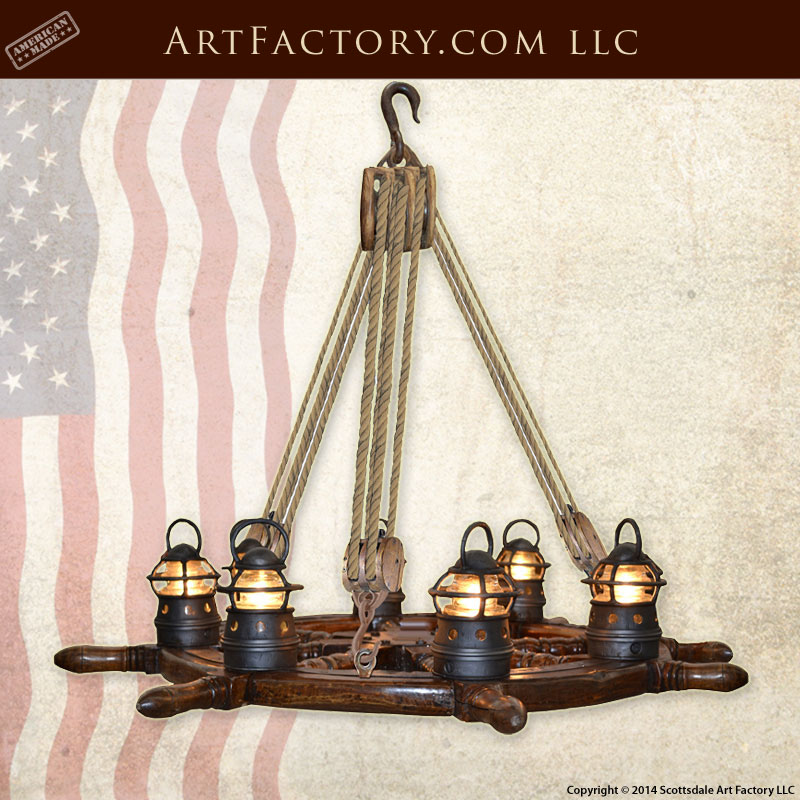 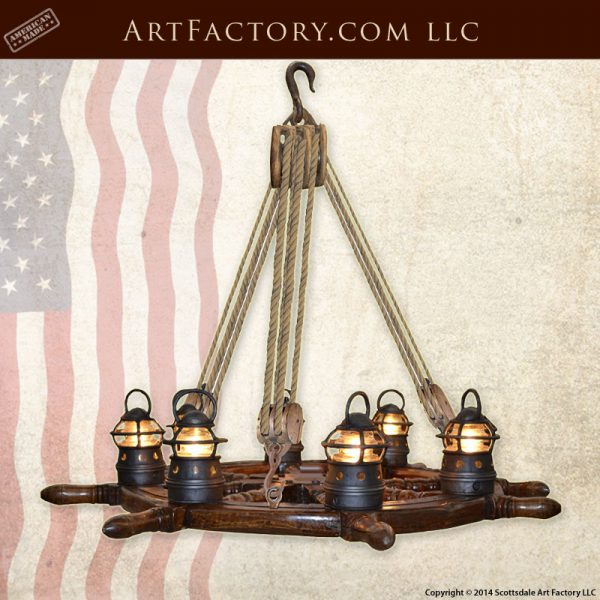 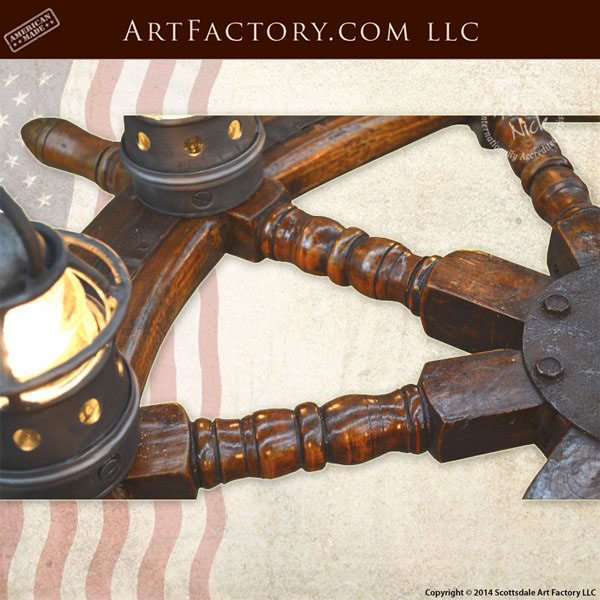 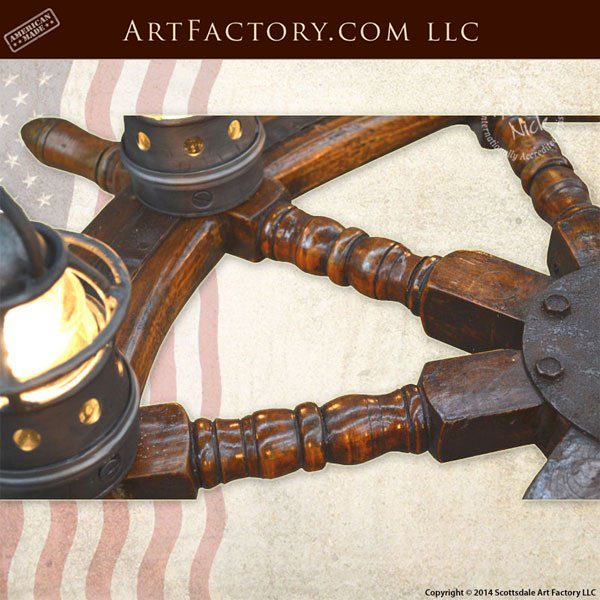 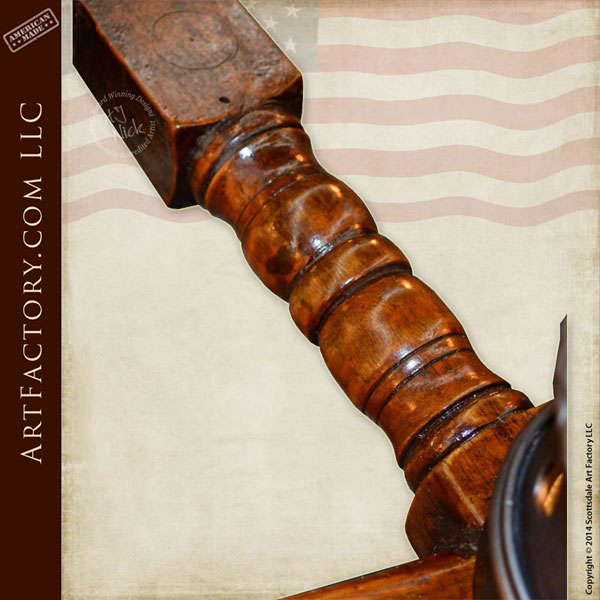 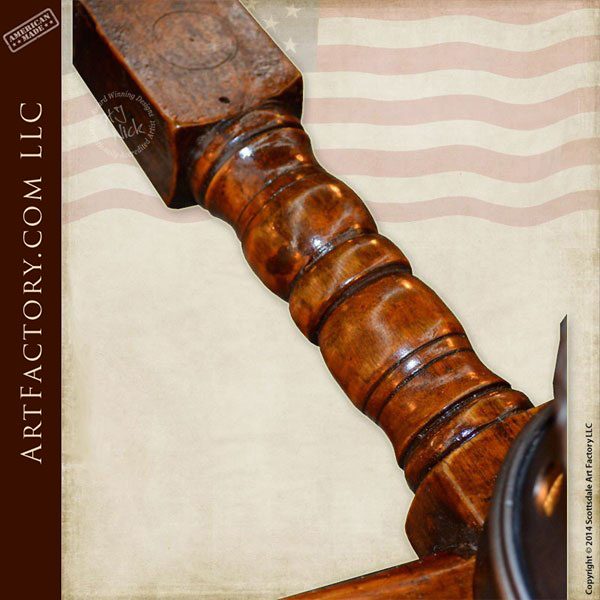 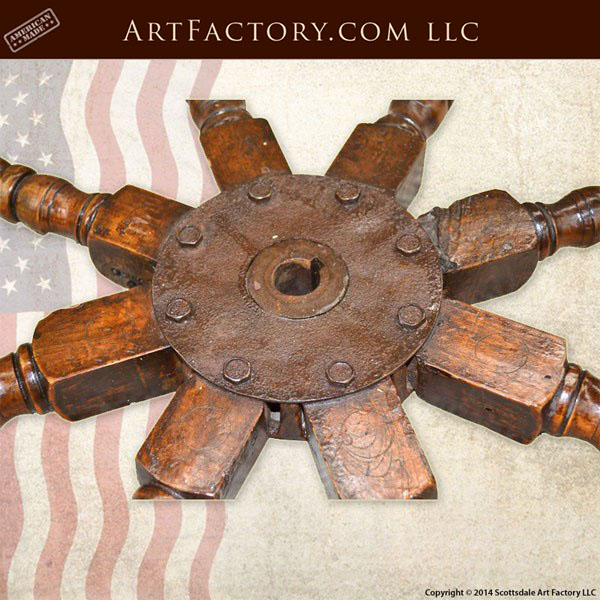 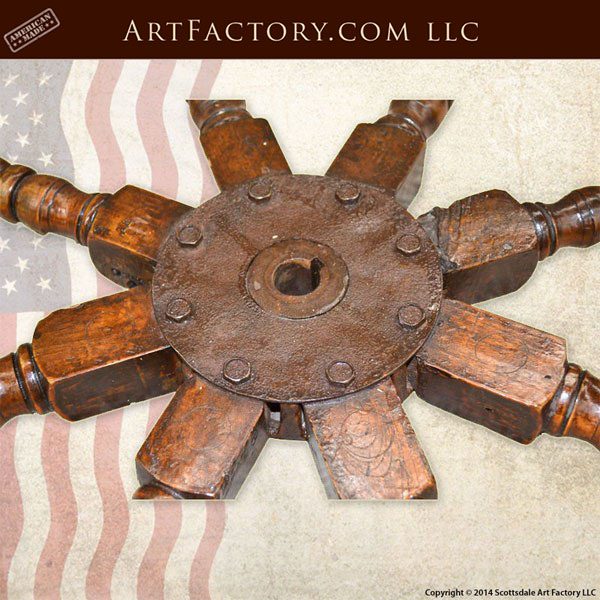 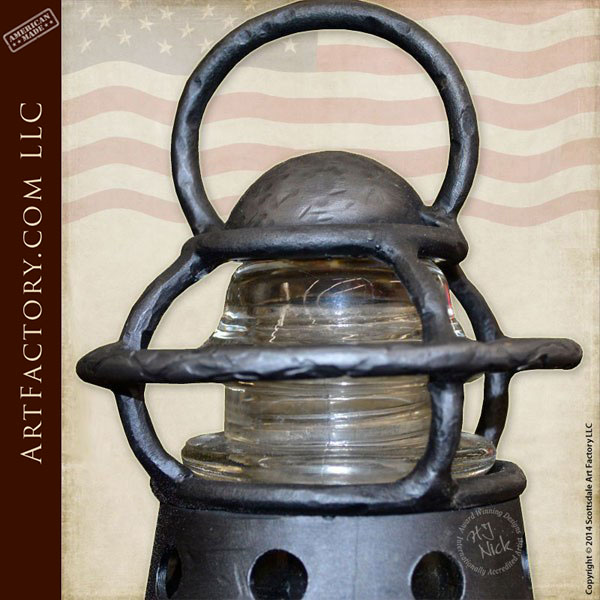 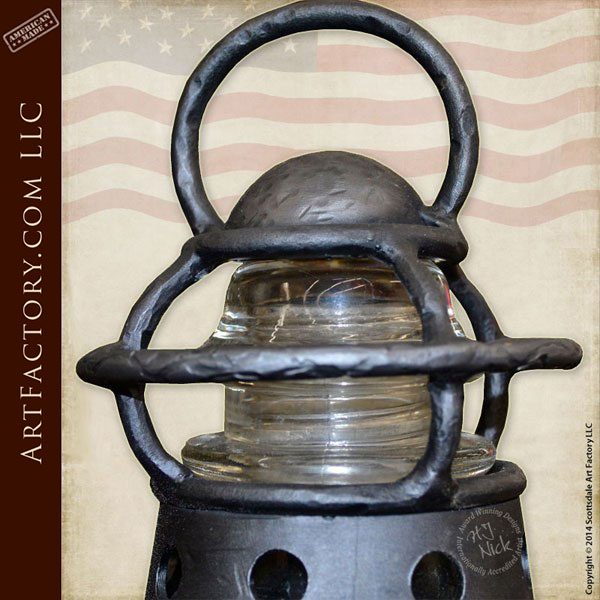 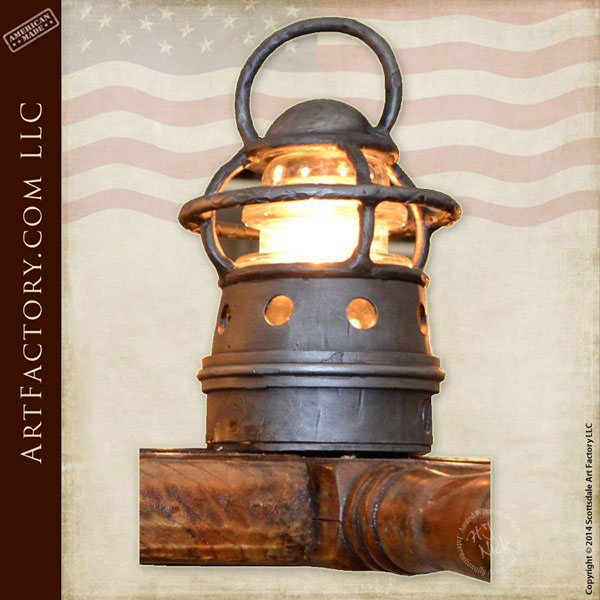 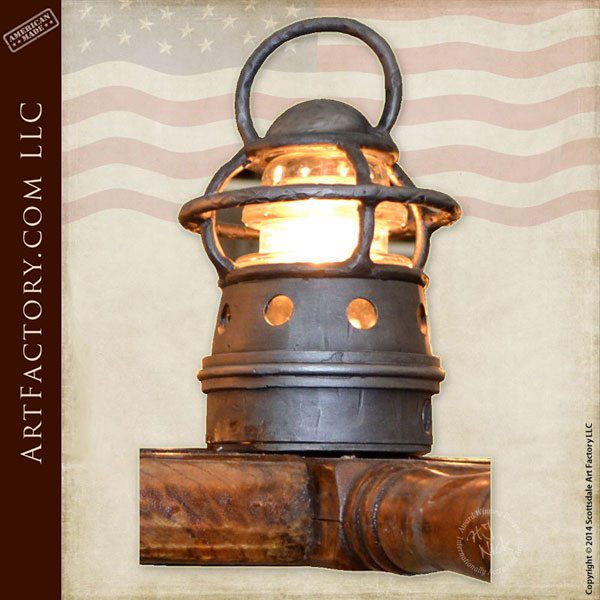 At ArtFactory.com Creating Fine Art Quality Custom Lighting And Home Furnishings From Genuine Antiques Is One Of Our Passions

Wrought iron parts hand forged by age old blacksmithing techniques How its Made - Master Blacksmithing - Solid hand forged wrought iron (no castings or hollow faux metals). All heat applied iron oxide hand patina finished (no powder coating or faux paint on iron finishes). All raw materials are the best in the world. We never import low quality materials. Order Any Size or Style - All American made and guaranteed forever and backed by our over a century of fine craftsmanship since 1913.

A ship's wheel is used to change its course. Together with the rest of the steering mechanism it forms part of the helm. Helmsmen on older ships used a tiller (a horizontal bar fitted directly to the top of the rudder post) or a whipstaff (a vertical stick acting on a tiller). Early ships' wheels (c. 1700) were operated to correspond to the motion of the tiller, with a clockwise motion (corresponding to a right tiller motion) turning the rudder and thus the ship to the left.

A traditional ship's wheel is composed of eight cylindrical wooden spokes (though sometimes as few as six or as many as ten) shaped like balusters and all joined at a central wooden hub or nave (sometimes covered with a brass nave plate) which housed the axle. The square hole at the center of the hub through which the axle ran is called a drive square and was often lined with a brass plate (and therefore called a brass boss, though this term was used more often to refer to a brass hub and nave plate) which was frequently etched with the name of the wheel's manufacturer.

The outer rim is composed of four sections each made up of stacks of three felloes, the facing felloe, the middle felloe, and the after felloe. Because each group of three felloes at one time made up a quarter of the distance around the rim, the entire outer wooden wheel was sometimes called the quadrant. Each spoke ran through the middle felloe creating a series of handles on the outside of the wheel's rim. One of these handles/ spokes was frequently given extra grooves at its tip which could be felt by a helmsman steering in the dark and used by him to determine the exact position of the rudder? this was the king spoke and when it pointed straight upward the rudder was dead straight. The wood used in construction of this type of wheel was most often either teak or mahogany. (Courtesy of wikipedia.org)

We work with dealers, builders, interior designers, and home owners to create custom handcrafted chandeliers, lighting, lamps, and sconces for your residential or commercial property. Our custom lighting fixtures are available in any size, style, and finish by our American craftsman, hand made using old world techniques to create a luxury fine art furnishing for your home or business. All hand crafted lighting is built using the highest quality materials and all of our custom lighting fixtures, including lamps, sconces, and chandeliers are wired to exceed all electrical code and safety requirements worldwide. Order any themed lights, the choices are endless when you order your custom chandeliers and lighting from ArtFactory.com, call 1-800-292-0008.

ArtFactory.com, a handmade in America custom lighting manufacturer based in Scottsdale, Arizona. Featuring designs by H. J. Nick, we have been designing and building some of the world's finest furnishings for interior designers with ordinary clients as well as more prominent and successful individuals, C.E.O.s, leaders, royalty and celebrities for over 100 years. Most of our clients want custom handmade products that have a BIG WOW factor and elegance, and all want investment value and products that make a proper statement reflecting their personality or the ambiance of the environment for which it is intended. 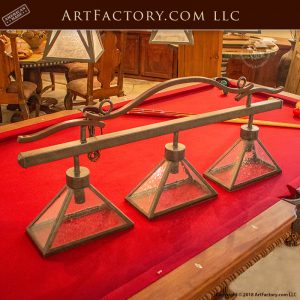 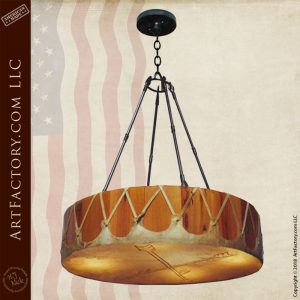 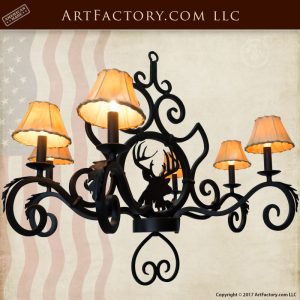 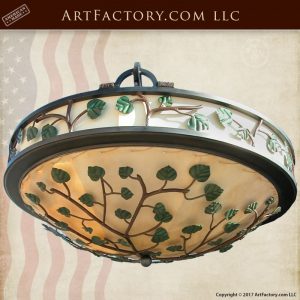 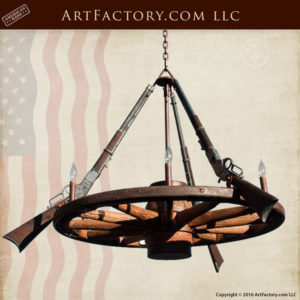 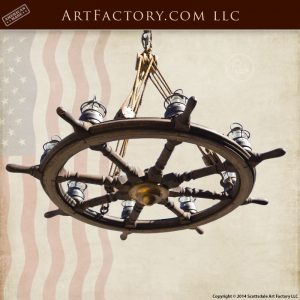 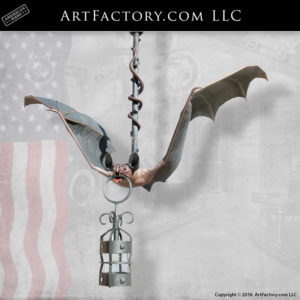 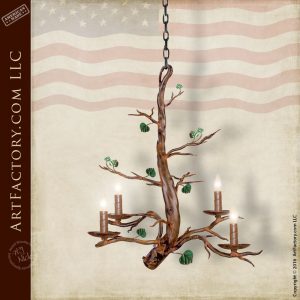 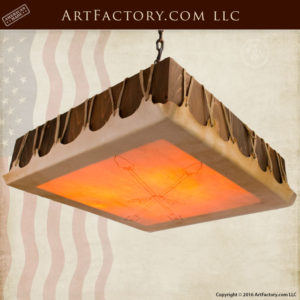 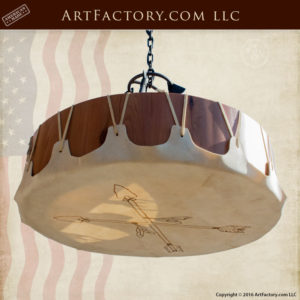 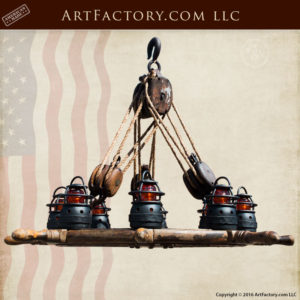 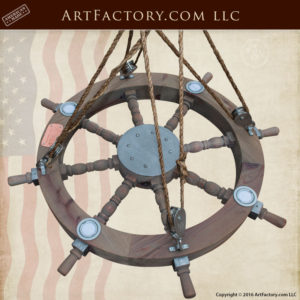