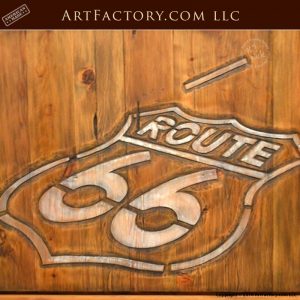 This Route 66 hand carved entrance is inspired by the iconic stretch of road equated with freedom and opportunity. Stretching from Chicago to Los Angeles, it was originally meant to link the small rural towns across America, making it easier for farmers to get their products to market and providing an easier route for truckers. What the road became was a lifeline for many searching for jobs and a better life. Entire industries sprouted from this road: gas stations with multiple pumps and tire services, drive up motels, and roadside diners and drive-ins. This is where America's car culture and road trips really started. This door takes all the little details of this piece of America and puts them in one place.

The master carvers created a masterpiece based on the memories of H.J. Nick and his time traveling this road in his youth. The door is carved in layers from very deep carving to lighter details, creating lots of depth in the image. The tiniest details are done including the Greyhound name on the back of the bus and the Coca-Cola logo on the bottle on the Coca-Cola sign. Full color was used making this scene even more vibrant. You have the driving culture, the sense of freedom, and the nostalgia of more innocent times wrapped up in a door that tells a story. What's your story? 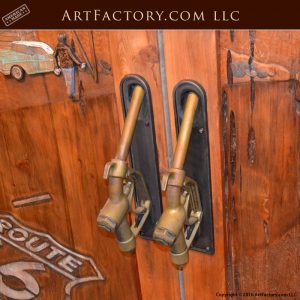 The inspiration for the doors themselves comes from the armory doors at Arundel Castle in the United Kingdom. The motte for Arundel castle was constructed in 1068. This castle was owned by the Howard family for a period of time and has been the seat for the Dukes of Norfolk for 850 years. The 3rd Duke of Norfolk was the uncle of Anne Boleyn and Catherine Howard, who both were wives of King Henry VIII. The 4th Duke of Norfolk was imprisoned by Queen Elizabeth, his second cousin, for plotting to marry Mary Queen of Scots, Elizabeth's rival for the throne of England. Being at the center of many political upheavals, this castle has stood through all, though it was damaged during the Civil War in 1642-45. 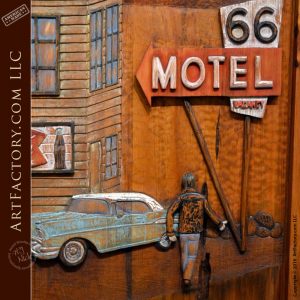 The trip is going well as they go west across the country Route 66. They stop and work at restaurants washing dishes or cleaning grease pits for food, usually the blue plate special, or maybe a dozen burgers for a dollar. Taking turns driving while the other sleeps, they make it to San Jon, New Mexico when that rod, that's been knocking loud enough to be heard over the rock and roll music on the car radio, suddenly shoots through the block. In total despair and down to their last 25 cents between them, they flip a coin for the big decision: whether to purchase a pack of Lucky Strikes or buy a burger and split it. It comes up cigarettes.

Two boys, broken down along the side of the road halfway to California, with no one to call for help and no funds. Panic starts to set in. In the cold New Mexican country between San Jon and Tucumcari they stand, trying to decide if they should jump a boxcar on the next train heading west or go back home to the east. Then a New Mexican State Trooper in a 1965 Mustang squad car pulls up.

The Road To Tucumcari And Beyond 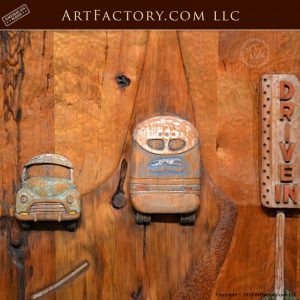 Unexpectedly, after the identity check and questioning this state trooper was a friend and was going to help the boys. First he calls a wrecker and, for the title to the 1955 Chevy Bel Air, the driver will take it off the road and keep it for the trade. Then the trooper takes them to Tucumcari and introduces them to the owners of the Palomino motel. H.J. Nick convinces the owners to accept them as new labor in trade for lodging. But now they find themselves in a Catch-22, no money to continue the trip, no food, no car and only a job that pays in trade. First they were offered and accepted a farm job feeding cattle in the deep snow of the New Mexican winter. That did not work out to their advantage. Then it occurs to them to sell the hunting guns that H.J. Nick's buddy owned and had brought along. They call the chief of police and ask how they might be able to sell these guns to get money for a car and gas. The chief of police himself offers $75.00 and the agreement that if his buddy wants to pick them back up at some later date he can.

Accepting this offer with newfound hope, they find a Route 66 car sales lot and purchase a broken down 1949 Pontiac Straight 8 for $50.00. Even with busted springs and lots of rust it seems to run ok and it promises hope of being able to continue the long road and uphill run to California. It makes the climb on Route 66 into Albuquerque, struggling along, and continues the climb to Gallup when the engine heats up and boils over. Not knowing not to shut it off before adding water, H.J. Nick's friend shuts it off and the engine seizes up. That's the end of the Pontiac.

A Broken Down Ride And A Harrowing Situation 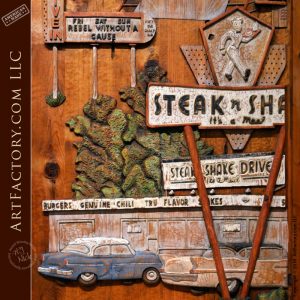 Back to walking and no money, the wrecker driver gives them a ride to the nearest motel with a restaurant in Gallup. Washing dishes for a meal and hanging around with all their stuff piled in a corner, it becomes obvious to other customers they are having a traveling problem. A couple of beatnik customers approach and offer to help. They explain to the boys they are very road weary and need a driver for their 1956 Chevy panel truck. If the boys agree to drive, they will give them a ride to Barstow, California.

This appears to be the solution to their problem, and they both jump at the opportunity. As they begin this part of the journey, now driving for their newfound friends while they sleep, on the radio the news is to be on the lookout for a green panel truck suspected in a robbery in Oklahoma City. Waking up his buddy, H.J. Nick explains that he suspects this is the green panel truck they're looking for. With a further examination of the contents of the truck, they find guns and a suspicious looking canvas bag, and are now more convinced that these are the suspects. 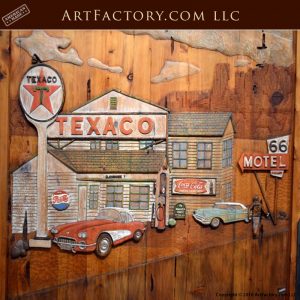 The Seligman Texaco And Steak And Shake

Of course, all of this went on while their new friends slept. Agreeing they might be in grave danger, they agree to not mention this when their new friends wake up. They only have 300 miles to go to get to Barstow. They get there with no incident and are relieved to be at the Greyhound station on their own. Thus ends one of many Route 66 trips H.J. Nick would take during his formative and academic years.

Artistic license was taken on this door art by adding the Seligman, AZ Texaco station, the Steak 'n Shake that H.J. Nick loved to visit and drive through in Illinois, and his favorite drive-in movie theater. All come together on this door from his fond memories of the 60s when being an American teen was an innocent time of fun and discovery with little fear of failing if you were willing to work hard and get an education.