And Hand Hewn With Mortise And Tenon

Entrance door thick plank door with old world charm. We created this custom entry door to capture the feel of a fortified structure while adapting it for todays world. Featuring beautiful warm cedar cypress planks on this hand made door and a functional speak easy. The genuine wrought iron portal decorative, is hand forged by our master blacksmiths

Add a touch of history to your home. When you received one of our works of art, you?ll feel proud knowing your door will only continue to beautify with age. Each entrance door is built by certified master craftsman and joined using mortise and tenon, Peg And dowel never glue. We stand by our work and give it the best promise around: guaranteed forever. 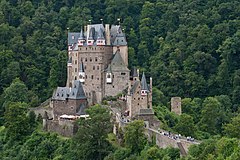 The castle is a so-called Ganerbenburg, or castle belonging to a community of joint heirs. This is a castle divided into several parts, which belong to different families or different branches of a family; this usually occurs when multiple owners of one or more territories jointly build a castle to house themselves. Only a very rich medievalEuropean lord could afford to build a castle on his land; many of them only owned one village, or even only a part of a village. This was an insufficient base to afford a castle. Such lords lived in a knight's house, which was a simple house, scarcely bigger than those of his tenants. In some parts of the Holy Roman Empire of the German Nation, inheritance law required that the estate be divided between all successors. These successors, each of whose individual inheritance was too small to build a castle of his own, could build a castle together, where each owned one separate part for housing and all of them together shared the defensive fortification. In the case of Eltz, the family comprised three branches and the existing castle was enhanced with three separate complexes of buildings.

The main part of the castle consists of the family portions. At up to eight stories, these eight towers reach heights of between 30 and 40 metres (98 and 131 ft). They are fortified with strong exterior walls; to the yard they present a partial framework. About 100 members of the owners' families lived in the over 100 rooms of the castle.