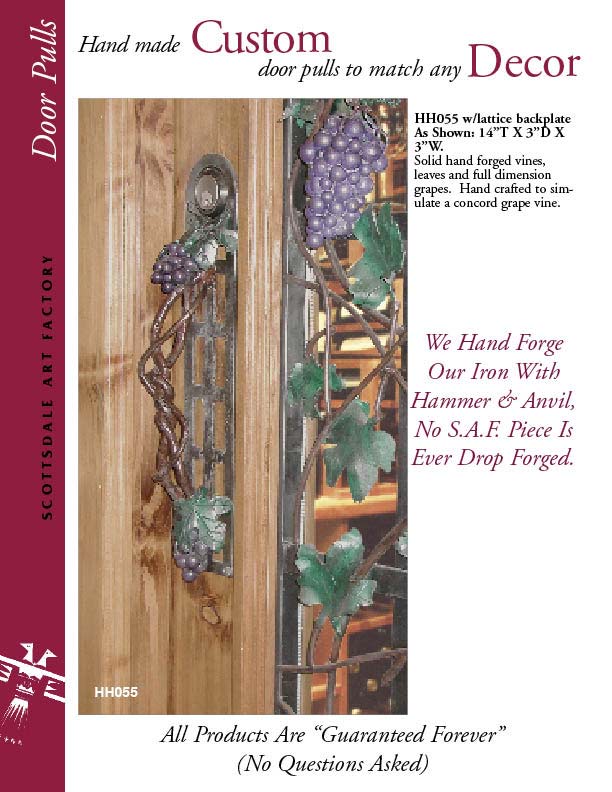 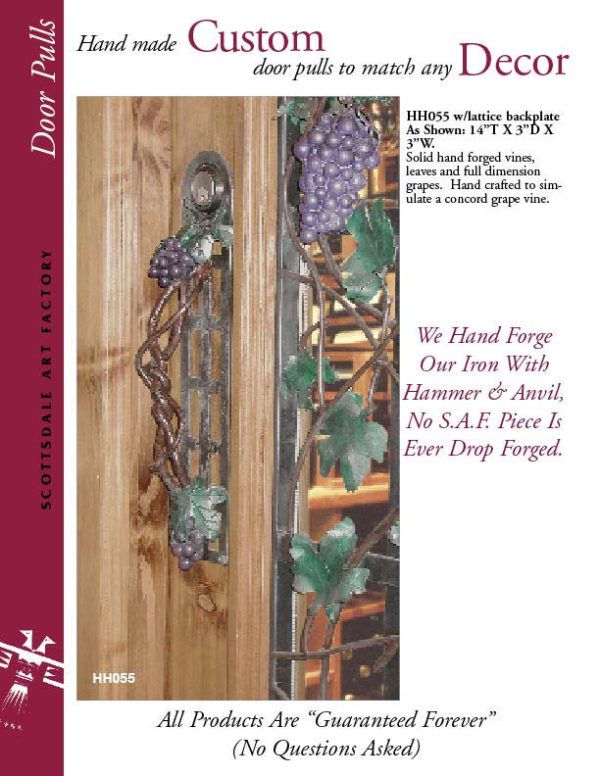 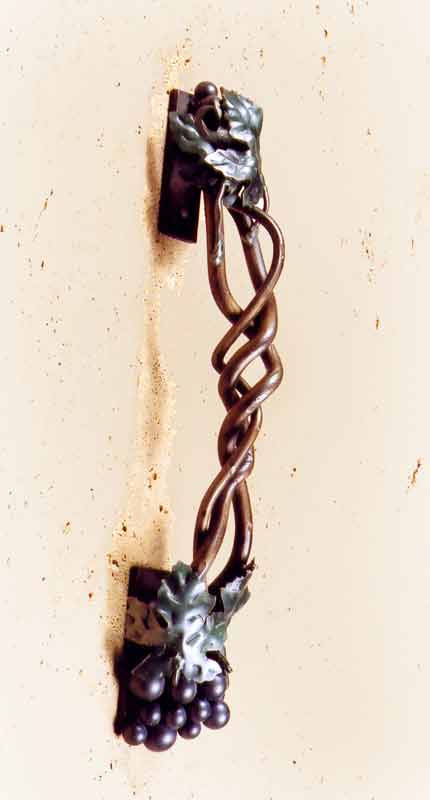 Fine Art Door Pulls - Master Blacksmiths Solid Hand Forged Wrought Iron - (no castings or hollow faux metals) - Built The Old Fashioned Way "When Everything Made In America Was Built To Last Forever" And Craftsmen Were Proud To Sign Their Work - All Heat Applied Iron Oxide Hand Patina Finished - (no powder coating or faux paint on iron finishes) - All American Made And Guaranteed Forever - Order Any Size Or Style - Backed By Our Over Nine Decades Of Fine Craftsmanship Since 1913.

Important Facts You Need To Understand About Wrought Iron this information will inform you and allow you to choose lighting that will appreciate in value.
Our Factory Designers Are Expert At Manufacturing Our Products And Are Not Salesman.
Our Factory Designers Are Instructed To Educate Allowing A Informed Decision.
Investment Quality, Equals Appreciable Asset Hardware Destined For Antiquity.

Historical Origin And Design Inspiration
A blacksmith is a person who creates objects from iron or steel by forging the metal; i.e., by using tools to hammer, bend, cut, and otherwise shape it in its non-liquid form. Usually the metal is heated until it glows red or orange as part of the forging process. Blacksmiths produce things like wrought iron gates, grills, railings, light fixtures, furniture, sculpture, tools, agricultural implements, decorative and religious items, cooking utensils, horse shoes and weapons.
A blacksmith's striker is an assistant (frequently an apprentice), whose job it is to swing a large sledge hammer in heavy forging operations, as directed by the blacksmith. In practice, the blacksmith will hold the hot iron at the anvil (with tongs) in one hand, and indicate where the iron is to be struck by tapping it with a small hammer held in the other hand: the striker then delivers a heavy blow with the sledge hammer where indicated.
When iron ore is smelted into usable metal, a certain amount of carbon is usually alloyed with the iron, (charcoal is almost pure carbon). The amount of carbon has extreme effects on the properties of the metal. If the carbon content is over 2%, the metal is called cast iron. Cast iron is so called because it has a relatively low melting point and is easily cast. It is quite brittle however, and therefore not used for blacksmithing. If the carbon content is between 0.25% and 2%, the resulting metal is tool steel, which can be heat treated as discussed above. When the carbon content is below 0.25%, the metal is either "wrought iron" or "mild steel." The terms are never interchangeable. In pre-industrial times, the material of choice for blacksmiths was wrought iron. This iron had a very low carbon content, and also included up to 5% off glassy slag. This slag content made the iron very tough, gave it considerable resistance to rusting, and allowed it to be more easily "forge welded," a process in which the blacksmith permanently joins two pieces of iron, or a piece of iron and a piece of steel, by heating them nearly to a white heat and hammering them together.
Hephaestus (Latin: Vulcan) was the blacksmith of the gods in Greek and Roman mythology. A supremely skilled artisan whose forge was a volcano, he constructed most of the weapons of the gods, and was himself the god of fire and metalworking.
Most Designs Used Today Were Conceived Hundreds Of Years Ago By Some Of The Worlds Most Famous Architects And Designers Working For The Aristocracies And The Well To Do Of Their Period. Many of these architects and designers are as well known as Leonardo da Vinci (renaissance architecture) or Michelangelo's (baroque architecture) as well as more recently William Morris, John Ruskin (founders of the Arts and Crafts furniture movement in circa 1800 England) Gustave Stickley (founder of the American Arts and Crafts movement in America circa 1900.) Frank Loyd Wright, Charles and Henry Greene to name a few.
Every Successful Creative Enterprise Is Always Built On A Foundation That Was Laid Down By Its Predecessors.</div id="red12"> All creative people are dependent upon the groundwork laid down by those who came before them. H. J. Nick, artist and direct descendant of the Marbella brothers, and ArtFactory.com have built on these foundations and have raised the bar of quality even higher. Thus setting a new standard and offering the finest one of a kind handmade furnishings found anywhere in the world in the 21st century.
Today Our Master Craftsman Build All Of Our Products Using The Identical Methods And Materials Of The Historical Period Of Each Furnishings Design Conception.

All 21st Century Designs Are Also Built By Our Master Craftsman Using These Classic Traditional Methods.

Whether We Build Products For Your Modern Dream Home Or Ancient Castle. Every element Is always built to future collectable antiquity investment quality standards and will stand the test of time. Destined to become a part of your families appreciating financial net worth as well as a proud to own legacy heirloom.
Many of our clients commission furniture For every room, doors, gates, built-in cabinets, lighting and hardware for their entire project. For Example: We are capable of starting with your entrance door design style or personalized carving coat of arms, family crest or business logo and bring this design in a tasteful elegant way in to you interior and exterior lighting fixtures, entrance doors, Interior doors, cabinets, structural elements, entrance gates or furnishings for every room. Making your home a unique piece of your families tradition and legacy.

Many of the worlds finest builders, architects, interior designers, as well business and home owners choose ArtFactory.com. Due to our large flexible American work force and our ability to manufacture coinciding with construction deadlines. Note: We do not import or out source allowing us total control of our supreme quality as well as your production requirements.

ArtFactory.com, an American manufacturer of custom door hinges, door straps, wood doors, iron gates, and designer furniture based in Scottsdale, Arizona, and Designs by H.J. Nick, have been designing and building some of the world's finest furnishings, all hand crafted in America, since 1913. Most of our clients want a furnishing that has a big WOW factor and timeless elegance. They all want investment value furnishings that make a proper statement reflecting their personality, or the personality of the environment for which the designer custom furnishings are intended. Our master level craftsmanship ensures your custom wrought iron gates and furnishings will stand the test of time, and are guaranteed forever, backed by over a century of fine craftsmanship. 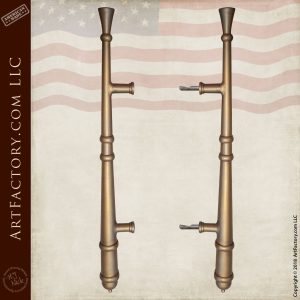 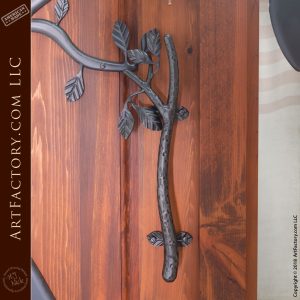 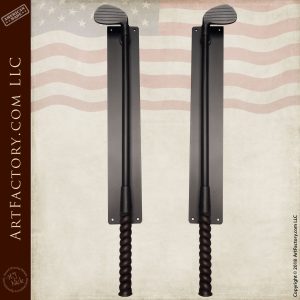 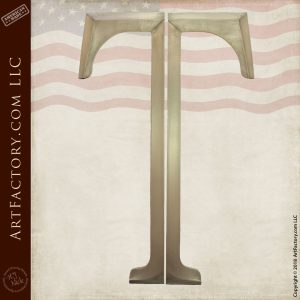 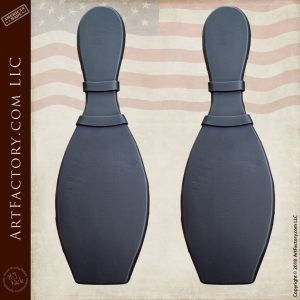 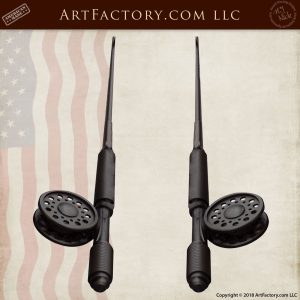 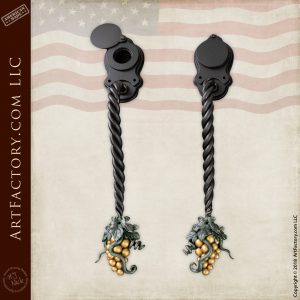 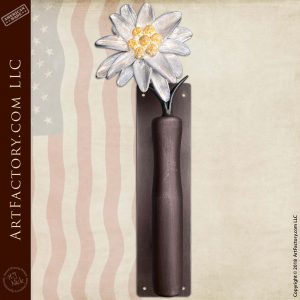 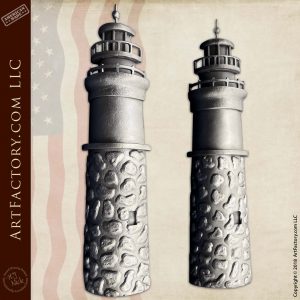 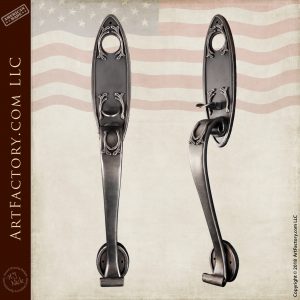 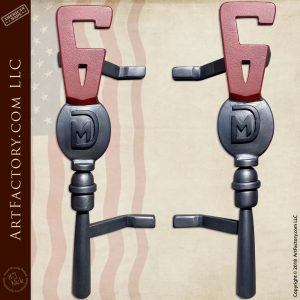 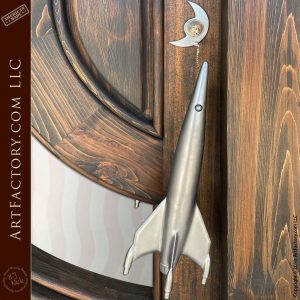