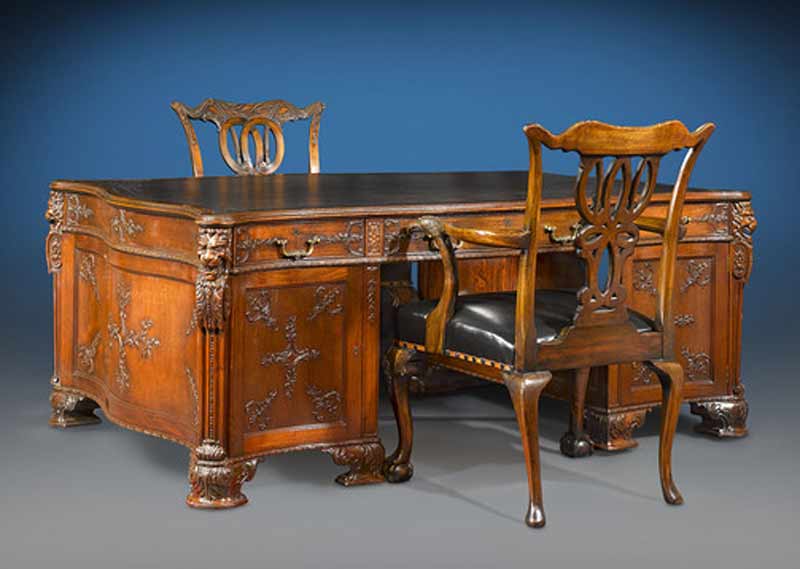 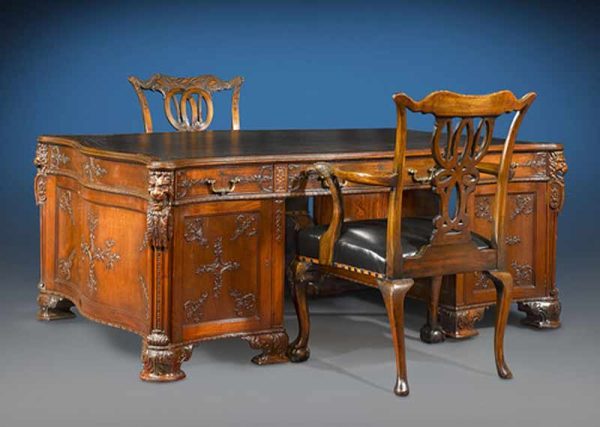 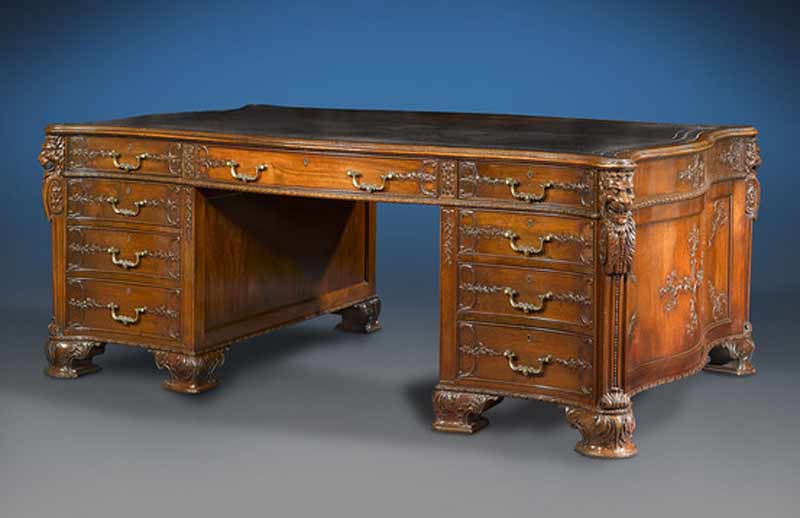 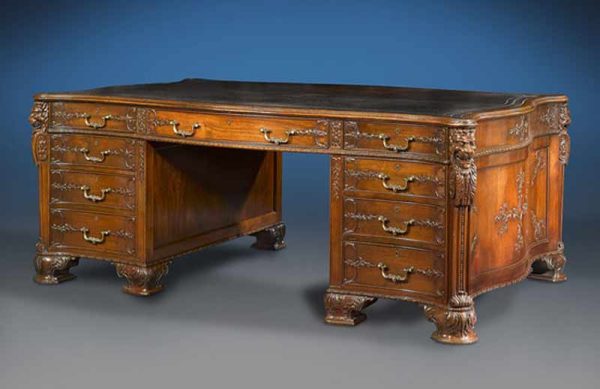 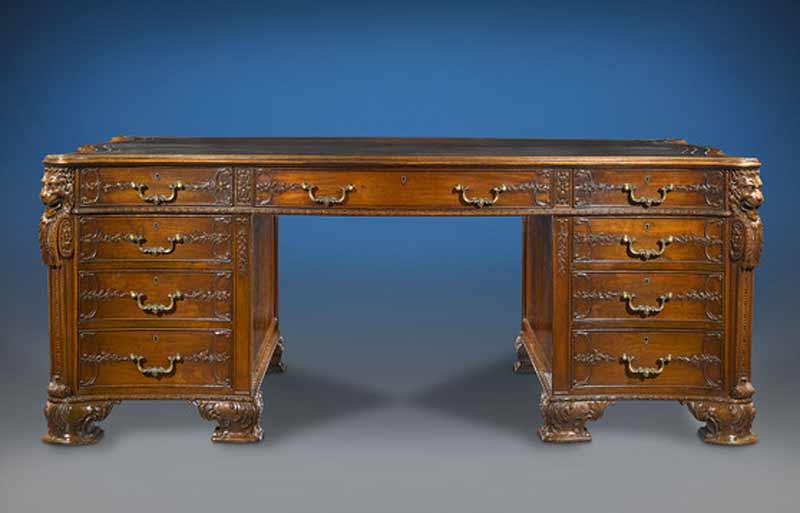 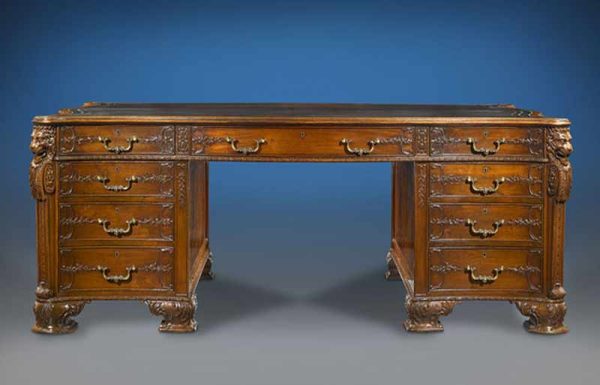 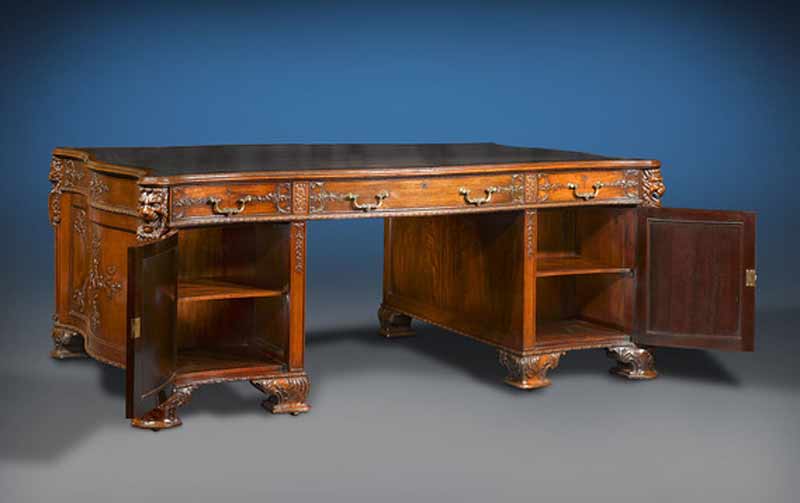 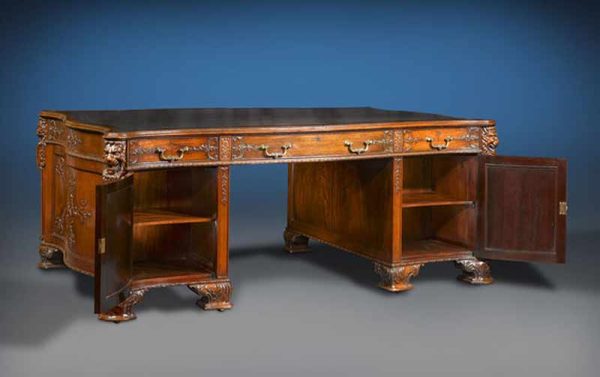 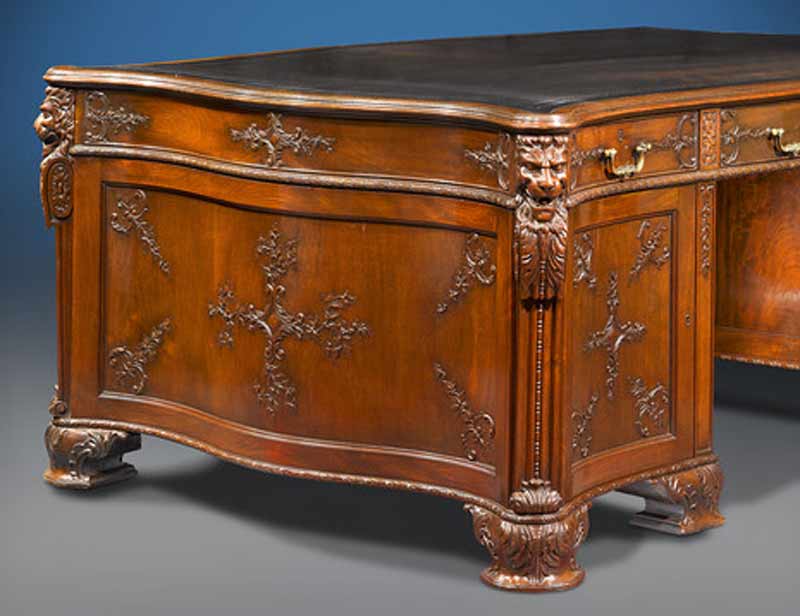 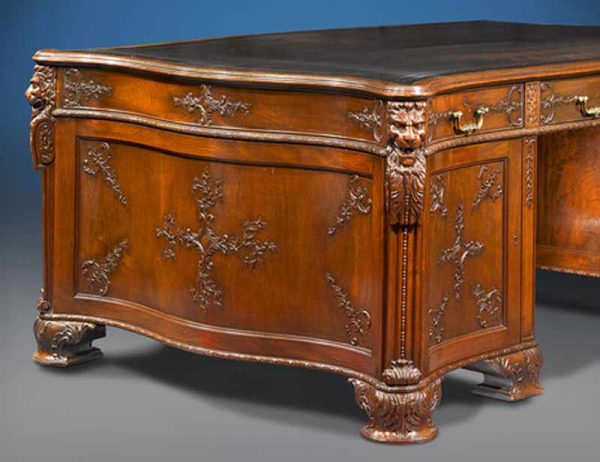 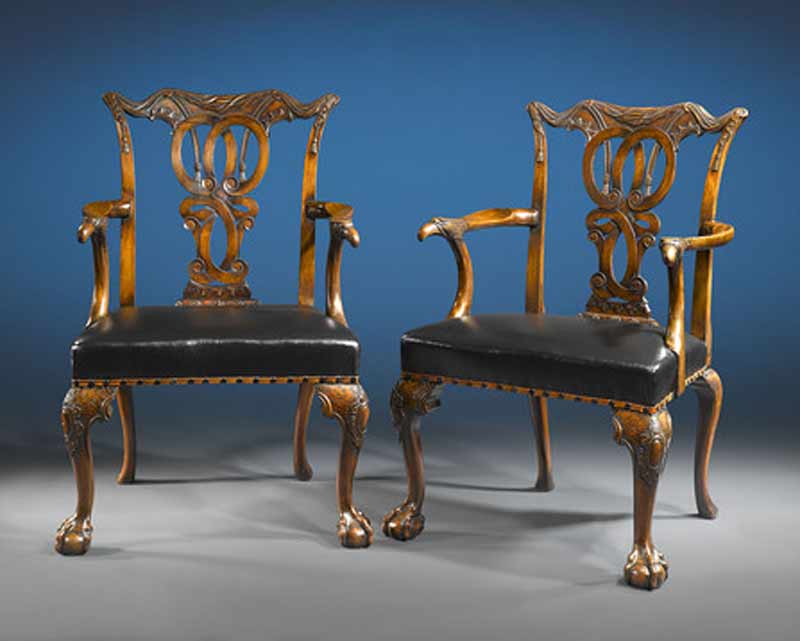 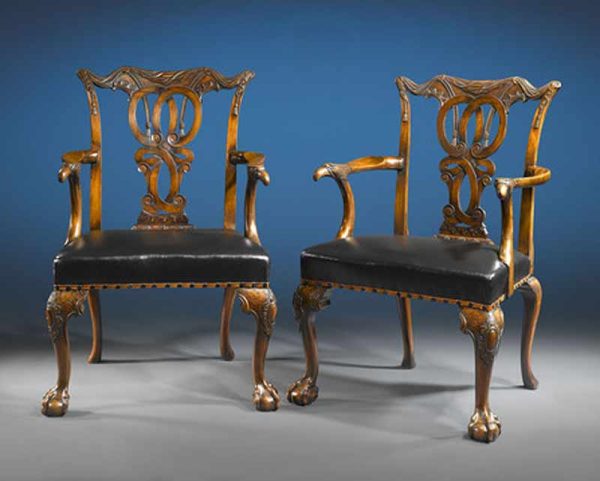 We Hand Craft All Desk Designs – 19th Cen Partner’s Library Desk from S. J. Waring and Gillows – Fine Art Furnishing – Solid Old Growth Mahogany – Order Yours As Original Craft, Not Reproduction, Made In The Same Hand And Materials As The Original – Designed From The Historic Record – Or Let Us Redesign To Create Your Personal “One Of A Kind In The World Heirloom Desk” – Epidermis Hide Leather Chairs – 8 Way Tied Suspension Seats – Hand Hewn, Mortise And Tenon Joined (means master crafted no fast process) – Built The Old Fashioned Way “When Everything Made In America Was Built To Last Forever” And Craftsmen Were Proud To Sign Their Work – All Species Of Wood Available – Structural Frames Using Solid Full Length Timber (no fake laminates, scarf joints or glued up parts; no veneers – no glue ups – no bolt ons) – Master Craftsmanship That Insures Your Furnishing Will Stand The Test Of Time – A True Family Heirloom And Valuable Future Antiquity – All Carvings Hand Carved By Our Master Carvers (no cnc, faux casted resin carving or gang carving) – Fine Art Finish 10 Process Hand Rubbed Finished To World Class Antique Collectors Standards (no spray on faux fast paint jobs) – Best Fabrics – Top Grain Leathers (processed in American tanneries only) – Guaranteed Forever – Backed By Over A Century Fine Craftsmanship Since 1913.

Please don’t be fooled by our upscale appearance. Our prices are usually lower than lesser quality name brand mass production fast process imports. “We Are The Factory,” hand crafted custom office furniture made in America since 1913.

Gillows of Lancaster and London (established 1727). The roots of this furniture-making and retailing company are located in the 18th century when the Gillows firm was founded (in 1727) in Lancaster by Robert Gillows, a joiner. In order to market its products London showrooms and a warehouse were established, and a distinguished clientele built up. During the 19th century, although producing furniture in a variety of historical styles, the firm also commissioned furniture from well-known contemporary designers, including T. E. Collcutt and B. J. Talbert. In 1897 Gillows was absorbed by Collinson and Lock, soon afterwards being amalgamated with S. J. Waring & Son to become Waring & Gillow.

In the early years of the 20th century the new company catered for a wealthy clientele through the kind of furniture seen in the Chinese Lacquer and Neo-Georgian room settings at the British Empire Exhibition of 1924. From the later 1920s the company assumed a more progressive edge through its embrace of a more contemporary European aesthetic.

This was brought about largely by the Russian emigré architect and designer, Serge Chermayeff who, after marrying into the controlling family, was appointed director of the firm’s Modern Art Studios. He collaborated with the French designer Paul Follot to mount a large-scale exhibition of Modern Art in Decoration and Furnishing in the London showrooms in 1928. It found particular favour in an editorial in the Architectural Review and, from this time until the outbreak of the Second World War, Waring & Gillow became recognized for its promotion of modern furniture design and interior decoration.

In the post-war years the furniture trade became increasingly competitive with the advent of retailing concerns such as Habitat and the later proliferation of out-of-town warehouse outlets. In the light of such competition Waring & Gillow’s position in the market place became increasingly problematic until its eventual demise in 1997.