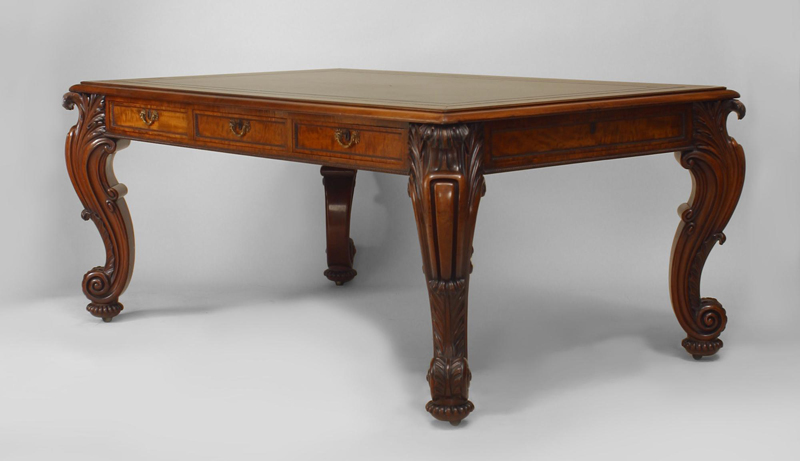 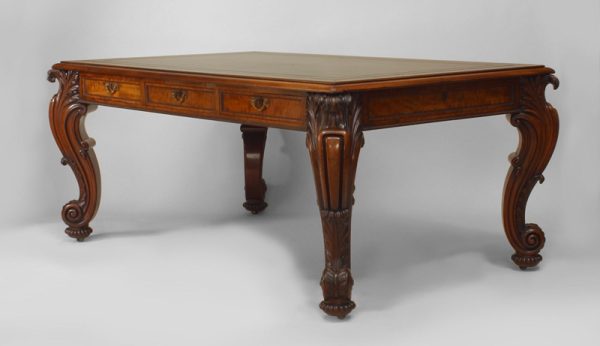 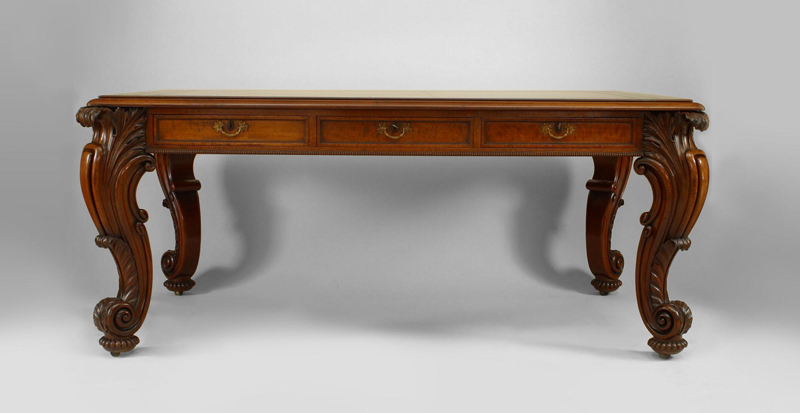 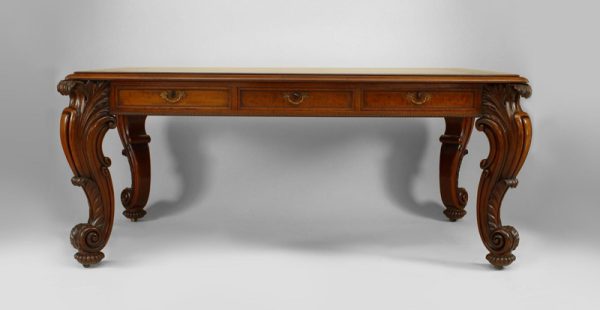 Office Desk -Gillows – English Regency (circa 1830) – Table Desk – Three Beaded Opposing Drawers – Leather Top – Hand Carved Cabriole Legs – Fine Art Furnishing – Solid Mahogany As shown, this custom office desk was handcrafted by the in-house master level wood workers. Using the customer’s four-poster bed for inspiration, we worked with the client to create a solid wood desk that matched the headboard edging design as well as the posts as a design guide for the desk table legs. Made from solid, full length, air dried cedar wood – a renewable resource timber – using hand hewn, mortise and tenon joined construction, and shown with a natural wood stain. All species of wood are available and over 400 finish colors to create a custom office desk for your home or office. One cord hole is built in to allow for ease of use for all electronics.

Waring & Gillow is a noted firm of English furniture manufacturers formed in 1897 by the merger of Gillow of Lancaster and Waring of Liverpool. The firm of Gillow’s of Lancaster can be traced back to the luxury furniture and furnishings firm founded by Robert Gillow (1704?72) in 1730.

Robert Gillow served an apprenticeship as a joiner. During the 1730s he began to exploit the lucrative West Indies trade exporting mahogany furniture and importing rum and sugar. Following his death in 1772, the business was continued by his two sons, Richard (1734?1811) and Robert (1745?93). In 1764 a London branch of Gillow’s was established at 176 Oxford Road, now Oxford Street, by Thomas Gillow and William Taylor.

The firm rapidly established a reputation for supplying high quality furniture to the richest families in the country. During the final years of the 19th century the company ran into financial difficulty and from 1897 began a loose financial arrangement with Waring of Liverpool, an arrangement legally ratified by the establishment of Waring & Gillow in 1903.

Waring’s of Liverpool were founded by John Waring, who arrived in the city from Belfast in 1835 and established a wholesale cabinet making business. He was succeeded by his son Samuel James Waring who rapidly expanded the business during the 1880s, furnishing hotels and public buildings throughout Europe. He also founded Waring-White Building Company which built the Liverpool Corn Exchange, Selfridge’s department store and the Ritz Hotel.

Gillow’s had established a reputation for the outfitting of luxury yachts and liners, including the Royal Yacht Victoria and Albert, liners Lusitania, Heliopolis and Cairo , Queen Mary (1934) and Queen Elizabeth (1946) for Cunard. During the First World War the Lancaster factory was turned over to war production, making ammunition chests for the Navy and propellers for De Havilland DH9 aircraft and during World War II produced parts for gliders and the Mosquito aircraft, while kit-bags, tents and camouflage nets were made by the upholstery department.

However, the business of the firm began to decline and the Lancaster workshops closed on 31 March 1962. In 1980 Waring and Gillow joined with the cabinet making firm Maple & Co, to become Maple, Waring and Gillow, subsequently part of Allied Maples Group Ltd, which includes Allied Carpets. (Source: wikipedia.org)