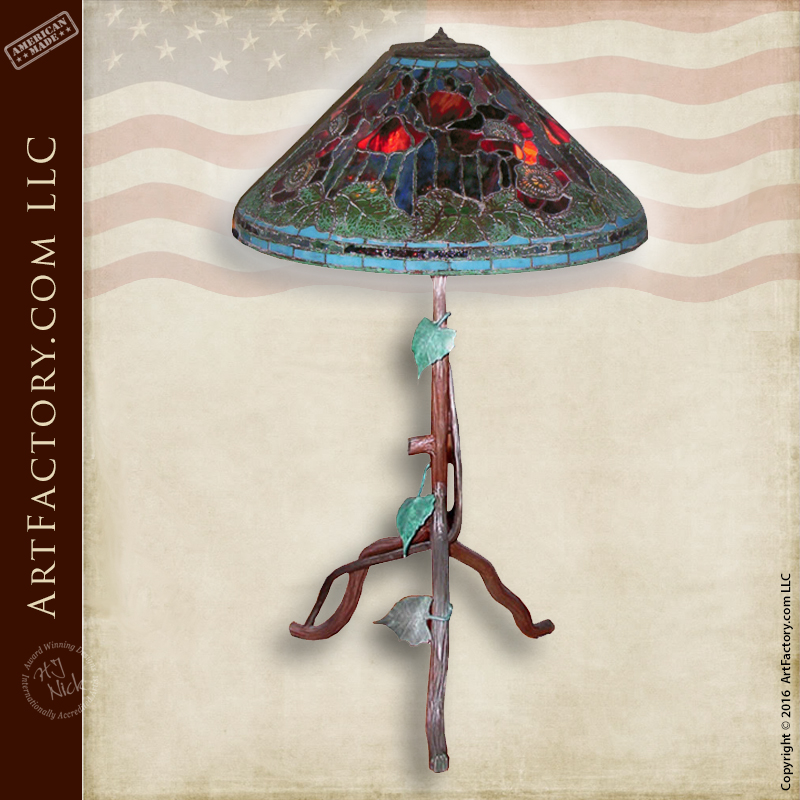 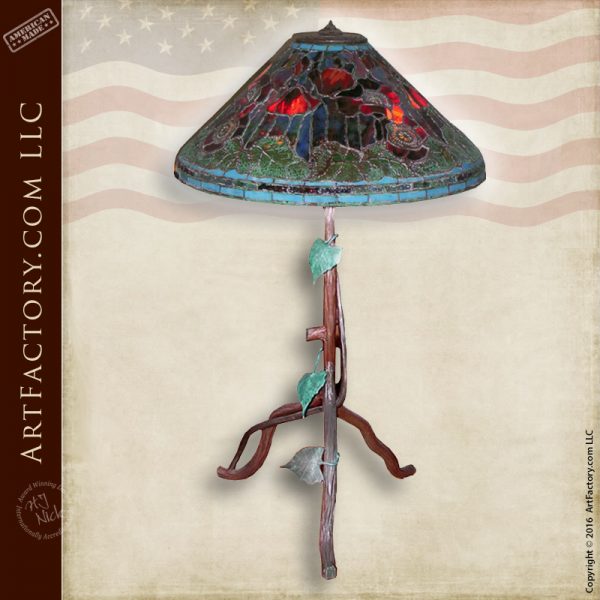 L.C. Tiffany Leaded Shade featuring Dichroic Background Glass. Hand Crafted In Original Craft In The Same Hand And Materials As The Original. Made in the USA, one at a time, by H.J. Nick and ArtFactory.com 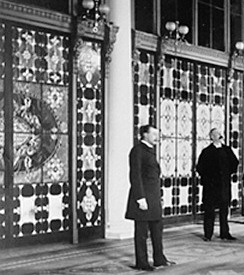 The Entrance Hall of the White House in 1882, showing the newly installed Tiffany glass screens

Tiffany started out as a painter, but became interested in glassmaking from about 1875 and worked at several glasshouses in Brooklyn between then and 1878. In 1879 he joined with Candace Wheeler, Samuel Colman, and Lockwood de Forest to form Louis Comfort Tiffany and Associated American Artists. The business was short-lived, lasting only four years. The group made designs for wallpaper, furniture, and textiles. He later opened his own glass factory in Corona, New York, determined to provide designs that improved the quality of contemporary glass Tiffany’s leadership and talent, as well as his father’s money and connections, led this business to thrive.

In 1881 Tiffany did the interior design of the Mark Twain House in Hartford, Connecticut, which still remains, but the new firm’s most notable work came in 1882 when President Chester Alan Arthur refused to move into the White House until it had been redecorated. He commissioned Tiffany, who had begun to make a name for himself in New York society for the firm’s interior design work, to redo the state rooms, which Arthur found charmless. Tiffany worked on the East Room, the Blue Room, the Red Room, the State Dining Room, and the Entrance Hall, refurnishing, repainting in decorative patterns, installing newly designed mantelpieces, changing to wallpaper with dense patterns, and, of course, adding Tiffany glass to gaslight fixtures and windows and adding an opalescent floor-to-ceiling glass screen in the Entrance Hall. The Tiffany screen and other Victorian additions were all removed in the Roosevelt renovations of 1902, which restored the White House interiors to Federal style in keeping with its architecture.

A desire to concentrate on art in glass led to the breakup of the firm in 1885 when Tiffany chose to establish his own glassmaking firm that same year. The first Tiffany Glass Company was incorporated December 1, 1885, and in 1902 became known as the Tiffany Studios.

Collection of Tiffany Lamps from the Virginia Museum of Fine Arts

In the beginning of his career, Tiffany used cheap jelly jars and bottles because they had the mineral impurities that finer glass lacked. When he was unable to convince fine glassmakers to leave the impurities in, he began making his own glass. Tiffany used opalescent glass in a variety of colors and textures to create a unique style of stained glass. He developed the “copper foil” technique, which, by edging each piece of cut glass in copper foil and soldering the whole together to create his windows and lamps, made possible a level of detail previously unknown. This can be contrasted with the method of painting in enamels or glass paint on colorless glass, and then setting the glass pieces in lead channels, that had been the dominant method of creating stained glass for hundreds of years in Europe.

We build only proud to own family heirloom furnishing, rich with family history and priceless heritage. This process begins with you and your family personalizing each piece with your own special design requests. H.J. Nick supervises the details and drafting process with his design team, and upon your approval, we then build your product. Once you receive your item, you can enjoy it secure in the knowledge it will increase in value and become a cherished family heirloom that is guaranteed to stand the test of time.

A Tiffany lamp is a type of lamp with many different types of glass shades. The most famous was the stained leaded glass lamp. Tiffany lamps are considered part of the Art Nouveau movement.

The first Tiffany lamp was created around 1895. Each lamp was handmade by skilled craftsmen, not mass- or machine-produced. Its designer was not, as had been thought for over 100 years, Louis Comfort Tiffany, but a previously unrecognized artist named Clara Driscoll was identified in 2007 by Rutgers professor Martin Eidelberg as being the master designer behind the most creative and valuable leaded glass lamps produced by Tiffany Studios. This does not diminish L.C. Tiffany’s role in creating the environment and employing many talented artisans to produce his work.

Tiffany’s first business venture was an interior design firm in New York, for which he designed stained glass windows. Most of his lamps can be grouped into one of seven specific categories: Irregular Upper and Lower Border, Favrile, Geometric,Transition to Flowers, Flowered Cone, and Flowered Globe lamps.

The Irregular Upper and Lower Border lamps carry an openwork crown edge that helps to simulate a branch, tree, or shrubbery. The Favrile category, which means handcrafted, identifies the first lamps Tiffany made with this label. His initials LCT, later replaced the Favrile stamp.

The Geometric category, done primarily by the male craftsman, speaks for itself. The Tiffany craftsman used geometric shapes such as triangles, squares, rectangles, and ovals to form these patterns for these lamps.

Next is the Transition to Flowers group, which is subdivided into the Flowered Cone and Globe lamps. All of these lamps follow a nature, or botanical, design using flowers, dragonflies, spiders with webs, butterflies, and peacock feathers. The difference within these two smaller categories is the difference in the lamp shapes, basically a cone and a globe.

Production – Aside from their categorization every lamp is prepared by using the copper foil method. First a pattern for the lamp is drawn out on a heavy piece of cardboard. Next a number and glass color is written on the pattern piece. After the pattern is drawn and labeled, the glass is laid over it and traced.

Once the pattern is traced onto the glass, the pieces can be cut and ground to their correct shape. Next the pieces need to be cleaned so the copper foil can be applied to the edges. The copper foil solution allows the pieces to adhere together. After the lamp has been placed accordingly and it is fully bonded, the edges need to be soldered together for a firm hold. Finally after the lamp has been soldered it is cleaned to bring out its beauty.