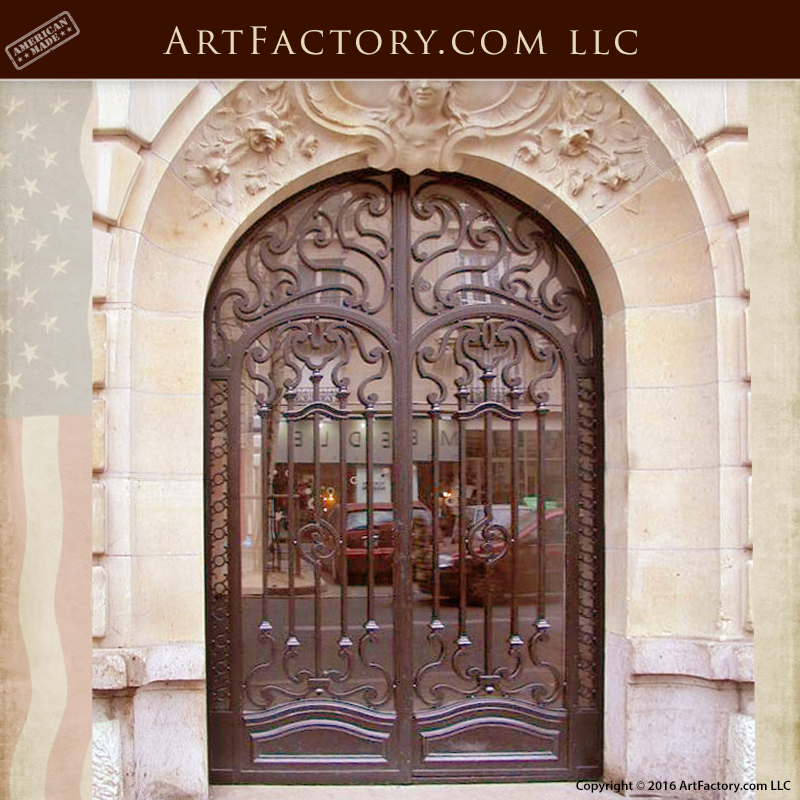 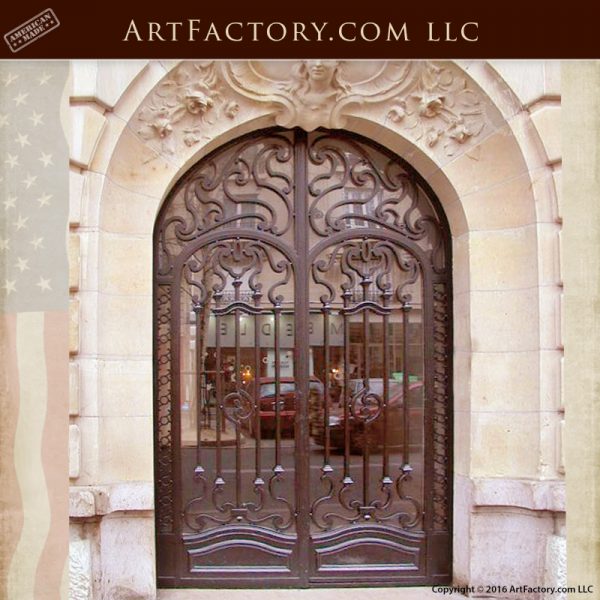 Solid Iron, Brass, Copper, And Genuine Precious Metals ( Gold, Silver) Is Available In All Styles
Investment Quality Equals An Appreciable Asset Furnishing, Destined For Antiquity.
Master Crafted In America Since 1913. Our prices are usually lower than lesser quality name brand mass production imports, this is because “We Are The Factory,” so don’t be fooled by our upscale appearance.
All Raw Materials Are The Best In The World. We Never Import Low Quality Materials.

Our Factory Designers Are Experts At Manufacturing Our Products And Are Instructed To Educate – Not Be Salesman.
“When You Deserve The Best”
Choose From Our Designs Or Use Your Design –
We Build To Our Hand Made Standards

Product Details As Shown
You May Order: The Gate Blade Only – A Complete Entry Unit – Straight Top – Eyebrow Arch Top – Full Arch Top – Single Door – Double Gates – Any Size And Style.
Order Any Door Design, As A Gate Or Garage Door – And Add Matching Windows
In This Section On Each Product Page Located Under The Appropriate Pop Down Menu – We Provide Detailed Product Information As Each Photo Is Shown. Each Item Is Shown As The Customer It Was Built For Required Its Specifications. However Each Item Can Be Changed To Any Size Or Redesigned With No Design Charge.
Our Factory Designers Are Expert At Manufacturing Our Products And Are Not Salesman.
Important Facts You Need To Understand About Wrought Iron this information will inform you and allow you to choose iron gates that will appreciate in value and stand the test of time.
It Is Our Experience, Customers Informed And Educated Make SAF Their Choice
There Is Never A Charge For Re-design

Price Includes All Shop Drawings With Design Specifications For Your Approval

Your Choice Of Artistic Hand Forged Gate – Door Pulls Is Unlimited
All Door Pulls Are Sized To Fit Your Particular Door – Click Here To Choose From Hundreds Of Designs All styles of handles are hand forged and anvil hammered from solid low carbon iron. All welds are blended out of site as though each creation simply naturally grew in to its form and shape We Never Offer Casted Copies Of The Real Artistic Hardware (also known as drop forged)
All Iron Is Coal Fired, Hammered By Master Blacksmiths The Old Fashioned Way And Patina Finished.
At ArtFactory.com, we take pride in our traditional, superior quality workmanship and craft our products from only the finest iron. Our master blacksmiths have been classically trained, and utilize old world techniques such as coal firing, anvil hammering and hand forging to create the finest handcrafted hardware available anywhere. All of our iron work is hand patina finished by heat applying iron oxides to achieve a natural patina finish that will stand the test of time.
Master Blacksmithing: The kind of hand forged metal work you can expect when you order from ArtFactory.com.
All Our Hand Forged Iron Is Hand Patina Finished To Stand The Test Of Time

Patina Finish As Shown: Various Colors Of Hand Applied Iron Oxide Patinas. All steel parts are hand patina finished the old fashioned way by iron oxide hand applied with high temperature heat. We never powder coat or faux paint our steel, it has been our experience that paint and powder coating methods do not hold up over time. You may choose from many natural iron oxide colors, and all our patina finishes are water based and earth friendly. You may order any single color or texture finish at no extra charge. Every surface of this hardware is finely finished including the under sides and hidden areas. Each item is finished to be virtually maintenance free and to age with grace to stand the test of time.

Fine Finish Information: Important details about patina finishes.
Our Guarantee: We Guarantee Each Item “Forever” ” No Questions Asked, backed by over nine decades of fine craftsmanship.

Our Price Guarantee: Why you may purchase hand made custom at production prices.
ArtFactory.com carries on the American Arts And Crafts Movement of the 21st century, in the same way William Morris and John Ruskin (founders of the Arts and Crafts furniture movement in circa 1800 England) inspired Gustave Stickley (founder of the American Arts and Crafts movement) in America circa 1900. Frank Loyd Wright, Charles and Henry Greene (inspired architects of the ultimate cottages such as the Gamble House in Pasadena California) are credited with raising quality standard to its highest level in their day. All of these great master craftsman also inspired the Marbella Brothers in the early 20th Century (founders of SAF circa 1913).
Every creative enterprise is always built on a foundation that was laid down by its predecessors. Creative people are also dependent on the groundwork laid down by those who came before them. H. J. Nick, artist and direct descendant of the Marbella brothers, and ArtFactory.com have built on these foundations and have raised the bar of quality even higher. Thus setting a new standard and offering the finest one of a kind handmade furnishings found anywhere in the world in the 21st century.
Our Heritage: Marbella brothers come to America.