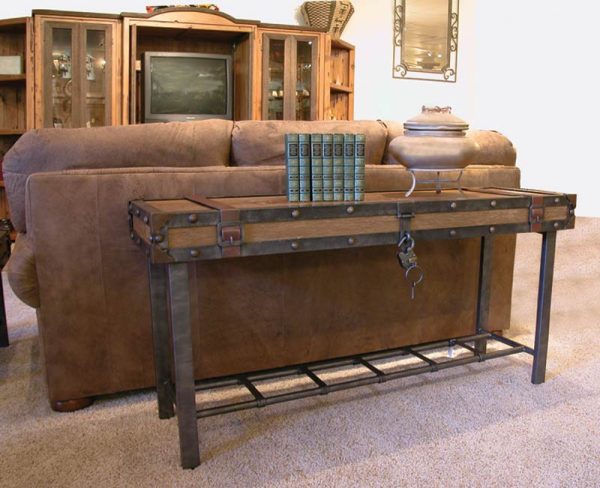 Hall Table Matches To CBCC621A – Wells Fargo Stage Coach Strong Box Coffee Table Hand Forged Wrought Iron And Solid Natural Air Dried Solid Cedar Cypress (renewable resource timber) (not kiln force dried ) – Order Any Size – Original Craft, Not Reproduction Made In The Same Hand And Materials As The Original – Designed From The Historic Record – Hand Hewn, Mortise And Tenon Joined (means master crafted no fast process) –
Built The Old Fashioned Way “When Everything Made In America Was Built To Last Forever” And Craftsmen Were Proud To Sign Their Work
– All Species Of Woods Are Available – Structural Frames Using Solid Full Length Timber (no fake laminates, scarf joints or glued up parts,no veneers – no glue ups – no bolt on,s) – Master Craftsmanship That Insures Your Furnishing Will Stand The Test Of Time – A True Family Heirloom And Valuable Future Antiquity – All Carvings Hand Carved By Our Master Carvers (no cnc, faux casted resin carving or gang carving) – Fine Art 10 Process Hand Rubbed Finished To World Class Antique Collectors Standards ( no spray on faux fast paint jobs ) – Best Fabrics – Top Grain Leathers (processed American tanneries only ) – Guaranteed Forever – Backed By Our Over Nine Decades Of Fine Craftsmanship Since 1913.
Order Any Size Or Style – We Can Help You To Design Your Dream Coffee Table ( At No Extra Cost )
Master Blacksmithing Solid Hand Forged Wrought Iron – (no castings or hollow faux metals) by the hand of a genuine master craftsman using age old tried and tested techniques.– All Heat Applied Iron Oxide Hand Patina Finished – (no powder coating or faux paint on iron finishes)
Designs By H. J. Nick and Art Factory. Com LLC a handmade in America custom furniture manufacturer based in Scottsdale Arizona has been designing and building some of the worlds finest furniture for some of the world’s finest interior designers with ordinary clients as well as most prominent and successful Persons,C.E.O.’s,leaders,royalty and celebrities for the last 99 years. Most of our clients want a furnishing that has a BIG WOW factor and elegance. All want investment value and furnishings that makes a proper statement reflecting their personality or the ambiance of the environment for which it is intended.
Please Don’t Be Fooled By Our Upscale Appearance. Our prices are usually lower than lesser quality name brand mass production fast process imports, “We Are The Factory,” Hand Crafted In America Since 1913.
Historical Origin And Design Inspiration
Charles Earl Bolles (1829″Disappeared 1888?), alias Black Bart, was an American Old West outlaw noted for his poetic messages left after each robbery. He was also known as Charles E. Boles, C.E. Bolton, Charles E. Bowles, and “Black Bart the Po8.” A gentleman bandit, Black Bart was one of the most notorious stagecoach robbers to operate in and around Northern California and southern Oregon during the 1870s and 1880s. The fame he received for his numerous daring thefts is rivaled only by his reputation for style and sophistication.
It is believed that Black Bart was born in Norfolk, England. When he was two years old, his parents emigrated to Jefferson County, New York, where his father purchased a farm. In late 1849 Bolles and a cousin took part in the California Gold Rush. They began mining in the North Fork of the American River in California. His brother Robert joined them in 1852, but died in San Francisco. Bolles then returned east and married Mary Elizabeth Johnson in 1854. By 1860, the couple had made their home in Decatur, Illinois. In 1862, however, Bolles decided to go to war he was shot in the appendix wich was also his verifacation to sherrifs.
The last stagecoach robbery The last holdup took place at the site, fittingly enough, of his first holdup, on Funk Hill, just southeast of the present town of Copperopolis. The stage had crossed the Reynolds Ferry on the old stage road from Sonora to Milton. The stage driver was Reason McConnell. At the ferry crossing, the driver picked up Jimmy Rolleri, the 19-year-old son of the ferry owner.
The stage had to travel up a steep road on the east side of Funk Hill. Jimmy Rolleri had brought his rifle and got off at the bottom of the hill. He intended to hunt along the creek at the southern base of the hill and then meet the stage at the bottom of the western grade. However, on arriving at the western side of the hill he found that the stage was not there. He began walking up the stage road. On nearing the summit, he encountered the stage driver and his team of horses.
Rolleri learned that as the stage had approached the summit, Black Bart had stepped out from behind a rock with his shotgun. He made McConnell unhitch the team and return with them over the crest again to the west side of the hill, where Rolleri encountered him. Bart then tried to remove the strongbox from the stage. Wells Fargo had bolted the strongbox to the floor inside the stage (which had no passengers that day). It took Bart some time to remove the box.
McConnell informed Rolleri that a holdup was in progress, and Rolleri came up to where McConnel and the horses were standing. He saw Bolles backing out of the stage with the box. McConnell took Rolleri’s rifle and fired at Bolles but missed. Rolleri then took his rifle and fired one or two shots. Bolles stumbled, dropped the items he had taken from the box, and fled. If he was actually wounded, it must have been very minor.
Click Here For More Product Information